Posted on Tuesday 29 March 2016 by Gareth Prior

Plans for the return of trams to Preston are once again on the table following the recent resubmission of a planning application for the start of the GUILD line with the hope that a final decision will be made at the start of June. As you may recall the plans for the line were rejected by councillors at the end of 2014 with concerns expressed over the effect it would have on the local road network and since then the Preston Trampower team – the developers behind the scheme – have been refining the plans.

When the plans were rejected by officers from Lancashire County Council they not only had concerns over the effect the planned line would have on the local road network – with the belief that not enough information had been provided to help them make a positive decision – but they also felt the trams would provide unacceptable noise for local residents. In respect of this second concern the Trampower Team have recently employed an independent noise consultant and they have shown that for residents adjacent to the tramway the maximum tram noise would be 52dBA for 2 seconds but that the background noise level is 63dBA – twice as loud. The consultants assertion is that most residents would not even hear the trams running. These findings have been included in the latest planning application which was submitted to the council on 4th March 2016 (application no. 06/2016/0208).

This application is just for the first stage of the planned GUILD line and would be considered as a pilot for the eventual full plan which would run between the M6 at Brookfield and the Railway Station. The line would partly be on the former Longridge Railway line with the rest using on street running including 50 metres of new line in Deepdale Street. If this plan is approved Trampower already have contractors lined up to begin site works to clear 25 years of vegetation over growth, refurbish and extend existing tracks, put up the overhead line and erect a tram depot. The initial plan would be for the rebuilt City Class pre-production tram (which has previously operated in Blackpool and Birkenhead) to run giving driver training and to acclimatise local people to tram operation.

The GUILD line would be built using a number of innovations developed by the Tramwpoer group including the use of the no dig – glue in the road LR55 rail on the street sections – this is a system which has been used for 20 years in Sheffield with no maintenance. The OHL would also be of a simplified system, developed by Trampower, and this has been used at the Carnforth Railway Centre since 2004, again with no maintenance required.

Eventually the full GUILD line would see six new City Class trams being be built. These would be 2.65m wide, weigh 22 tonnes unladen and would be 29m long, with 80 seats, 2 wheelchair spaces and standing for 120 passengers. They would be assembled in Preston from structures, components and other parts also made in Lancashire, using available coach building skills.

Local planners are due to make their decision on this plan on 3rd June 2016.

With thanks to Professor Lewis Lesley for information contained in this article. 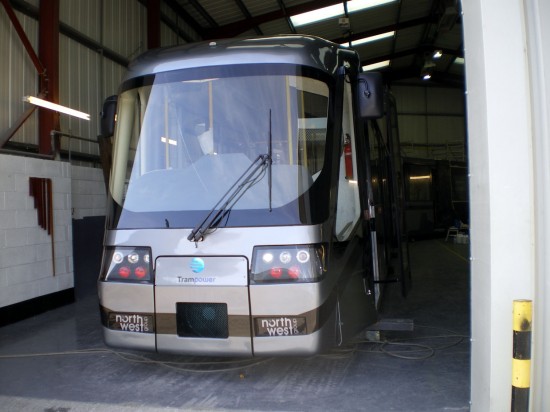