Three of the established and popular ‘Gold’ running days on the Blackpool tramway were operated by the heritage tram fleet over the Easter Bank Holiday weekend. Twelve different trams were used on this service with seven cars rostered to operate on each day; however, the undisputed star of the show was Marton Box 31 which debuted on Easter Sunday and proved to be an instant hit despite some pretty appalling weather conditions!

Each day saw the normal use of six heritage trams running to a set timetable, including a run to Fleetwood for each. However, thanks to the availability of extra volunteers as a result of the most recent recruitment drive, one extra tram also appeared on each of the three days and was directed around the system as required as a ‘special’ – just like in the old days!

Saturday 26th March saw the heritage fun kick off with a trio of Balloon cars comprising 701 (its year debut following removal of its snowplough), 715 and 717, along with Twin set 272+T2, Brush car 631, Ex-Towing car 680, and Box 40 running as a special but also performing a trip to Fleetwood in the afternoon. The trams performed impeccably all day apart from Balloon 701 which suffered a minor fault on the last Fleetwood tour of the day, and consequently didn’t run again all weekend.

The main event on Easter Sunday 27th March was the first use of Marton Box 31 following its arrival on loan from Beamish. The tram did the 1000 Pleasure Beach to Fleetwood trip as a special ‘premium price’ debut tour, with Balloon 715 following close behind as a duplicate, but unfortunately heavy rain and strong winds meant that this was not as well patronised as hoped. However, a few brave souls enjoyed 31‘s first run to Fleetwood since 1998, and its first appearance on Blackpool tracks since 2010. The other trams which ran on this day were Brush car 631, Ex-Towing car 680, Twin set 675+685 and Balloons 711 and 717, with 711 being an unusual choice for heritage tours presumably due to a lack of other suitable enclosed cars.

Bank Holiday Monday 28th March saw a slight improvement in the weather with some sunny spells in between heavy showers. The initial output consisted of Marton 31, Bolton 66 (running for the first time this year), Twin set 272+T2, Centenary car 648, Twin set 675+685, Ex-Towing car 680 and Balloon 715. The first Fleetwood run saw 680 paired with Bolton 66 which returned to depot soon after so that its driver could transfer onto car 31, whose own driver had requested a change of tram due to the cold. Balloon 717 emerged later in the afternoon whilst despite not running to a timetable, 31 did another journey to Fleetwood in-between the scheduled tours meaning that eight different heritage trams had visited the northern end of the line in a single day.

Naturally the poor weather put off many visitors and so passenger numbers were a little disapointing, but this did not put off the heritage team who worked as hard as ever to put on a good show for those who were present. Although 31 was the star attraction, honourable mention should be made of 680 which ran on three consecutive days – its most intensive period of use since its return to Blackpool last summer, and hopefully a sign that its frequent transponder issues may have finally been resolved. 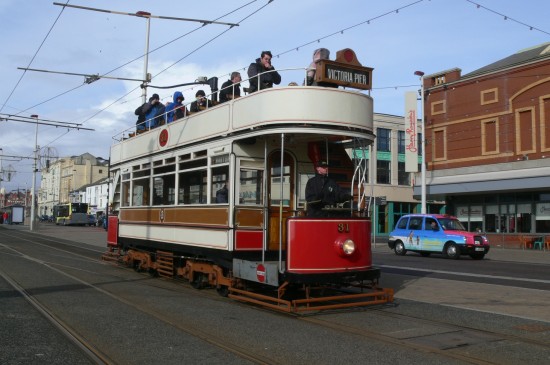 Seen during a rare sunny spell, Marton Box 31 is seemingly racing with a multicoloured taxi whilst on its way to Pleasure Beach during its second day of operation back in Blackpool, Monday 28th March. 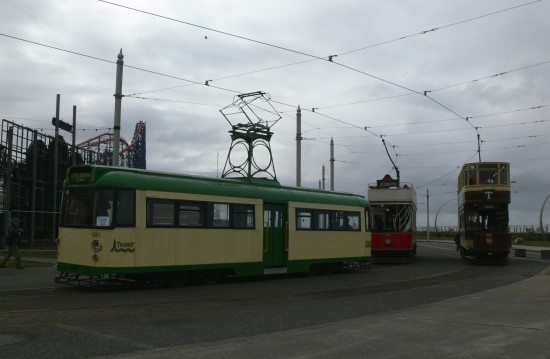 Three trams which are currently on loan to Blackpool's heritage fleet - Railcoach 680, Marton Box 31 and Bolton 66 - seen together at Pleasure Beach on Easter Monday. (Both Photographs by Andrew Waddington)