The second ‘Winter Gold’ heritage tram running weekend in Blackpool took place over the weekend of 27th & 28th February, once again putting a fine selection of historic trams to work on the tramway. For many, the highlight – and certainly the most unusual event of the weekend – was the surprise use of Open Boat 230 on both days, surely the earliest in a year that a Boat car has ever been used in public service!?

Two days of dry but cold weather encouraged the dedicated (crazy?) volunteers at Blackpool to bring out an unexpected treat in the shape of 230. As if the novelty of a Standard, an unrefurbished Balloon car and two Twin sets running in winter wasn’t enough, quite a healthy number of hardy souls couldn’t resist sampling an open tram ride along the promenade in winter, something few if any of those present would ever have experienced previously. Boat 230 even made it to Fleetwood on both days, a ride certainly not for the faint hearted but definitely a memorable occasion and one for the history books! Another notable occurrence was the placing of a temporary heritage tram stop near St Chad’s Road to serve a nearby model tram show; the first time passengers have been able to board or alight a traditional British-built tram at this location since 2011.

Unfortunately, the reliability of the heritage fleet is becoming a cause for concern with a few problems arising on Saturday 27th February. Both Ex-Towing car 680 and Western Train 733+734 were rostered to operate but neither even made it onto the promenade before failing. The illuminated Train was due to be the first heritage car out but suffered a defect on its way out, which blocked the line from Rigby Road depot and delayed the start of the day’s action. The day’s output therefore comprised Box 40, Standard 147, Boat 230, Twin set 272+T2 and Balloon cars 715 and 717, although late in the day 717 also suffered a minor fault and was replaced by Brush Railcoach 631.

Sunday 28th February saw cars 40, 230 and 272+T2 out again, this time joined by Centenary car 648, Twin set 675+685 and Balloon 723. Happily this day was much less eventful and all six trams completed a full day of service with all of them managing a visit to Fleetwood, with the Boat car being especially popular once again. Of note, several trams were making their year debuts (230, 272+T2, 715 and 723) with 723‘s snowplough having been hastily removed to enable its appearance. Saturday was also the last expected outing in Blackpool for car 147 before its much-anticipated visit to Beamish Museum, and the tram is expected to depart for this destination in the next few days.

Despite some unforseen challenges, the heritage team did their best to put on an impressive spectacle and the winter operating weekends certainly seem to have been a great success on the whole, offering enthusiasts and the general public alike some very unusual tram riding opportunities. Amazingly it is now only four weeks until Easter, and the next gold heritage weekend in Blackpool – bring it on! 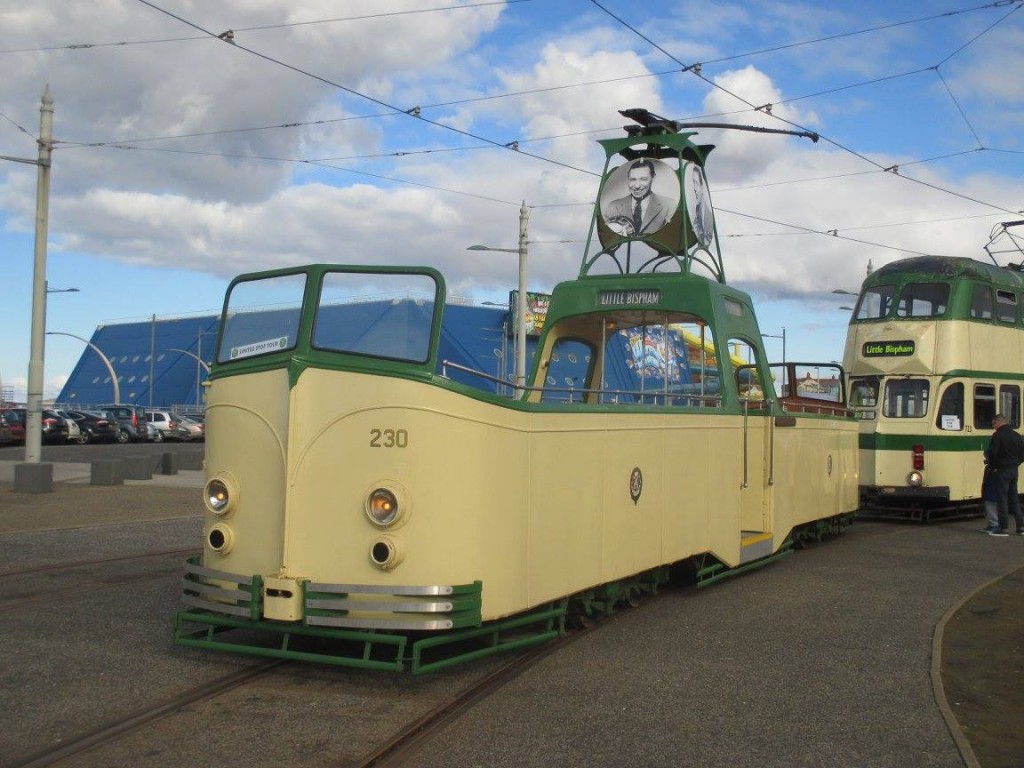 This is no ordinary image of a Blackpool Boat car in the sun at the Pleasure Beach - because it was taken on 28th February! 230 is seen during a pause between trips on the winter gold weekend. (Photo by Rob Bray)

5 Responses to Boating in February!