New figures released by Edinburgh Trams have shown that passenger numbers are continuing to increase with a rise of 12% when compared to this time last year. The projected total number of passenger journeys in 2015 is also 5.1 million – meaning the service is continuing to outperform targets set in the business model.

The busiest week of the service so far was during the Edinburgh Festival season in August when 137,000 passengers were carried – this was even better than the first week of operations in May 2014. Six major events at Murrayfield Stadium have also helped figures to increase with around 10,000 additional passengers carried to and from the stop.

Cllr Lesley Hinds, Chair of Transport for Edinburgh, said: “These latest figures demonstrate the continuing popularity of Edinburgh Trams and add to the success of our first year of operations, which saw almost five million passengers ride the trams. We now want to build on this success for the future of the service, as we look to extend and develop the network to provide for even more people in Edinburgh.”

Ian Craig, Chief Executive of Transport for Edinburgh, added: “Edinburgh Trams continues to go from strength to strength and this is because of a huge effort from the team over the past two years. Our first year of operations was a big success and a time of much excitement but the real test is sustainability and continuing high quality operations. The service we’re delivering is great, it’s highly reliable and, as a result, we’re seeing more passengers get on board than last year. Edinburgh Trams is getting more popular and we want to make sure that trend continues for the benefit of the city.”

The Park and Ride site at Ingliston has also increased in popularity during the year with a 60% rise when compared with the same time last year.

Between them tram drivers and TSAs have completed more than 82,000 journeys in 2015 covering 649,073 miles. In total since services started trams have covered 1,041,728 miles along the route between York Place and Edinburgh Airport.

Despite the doubts and continued opposition in the city it would be fair to say that Edinburgh Trams is becoming a success and is here to stay – here’s to the extensions in future years. 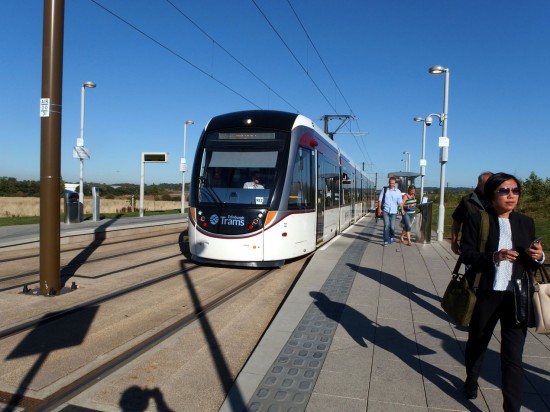 The Edinburgh Trams success story is really starting to take off now with more passengers than ever now be carried on the line. The Park and Ride site at Ingliston has also seen a 60% increase in usage in the past 12 months. It is at that very stop that we see 253 on 1st October 2015 running a service through to the Airport. (Photograph by Keith Chadbourne)