As a Christmas bonus we will be taking some extra trips down memory lane this week in our Picture in Time series starting off in Blackpool just over 10 years ago, 10 years which have seen major changes on this always popular tramway. The tram we take a look at today is Balloon 726.

This photo shows 726 sitting at Tower whilst working a service through to the southern terminus at Starr Gate with the tram carrying one of the better all over adverts of the period for Thwaites Beer. This was in fact the very first all over advert carried by the last of the Balloon cars having been applied in early 2000 and by the time this photo was taken on 15th July 2005 this livery only had just over a year to go before it was replaced by another advertising contract. Today 726 still carries its advert for H M Coastguard and is currently undergoing the very early stages of a full restoration at the Fleetwood Heritage Leisure Trust’s Wyre Dock storage compound. 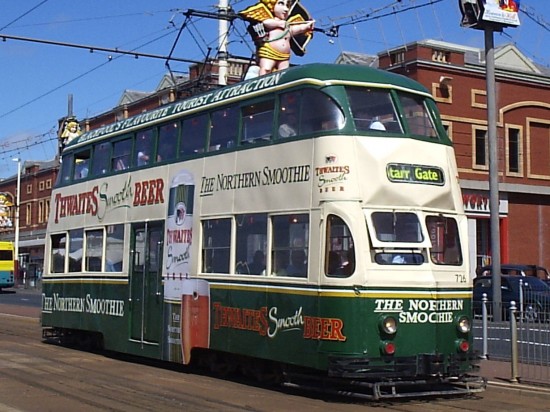