The weekend of 26th and 27th September saw the eyes of tram enthusiasts looking towards Blackpool with the most ambitious period of heritage operations planned since the upgrade of the tramway to help celebrate the 130th anniversary of the tramway. Over the course of the weekend 21 different heritage trams carried passengers (including two members of the “B” fleet) whilst both Rigby Road and Starr Gate Depots opened their doors to a lucky few giving a rare chance to see behind the scenes. The weekend also saw the return to service of Twin Car 675+685 (see separate story here) and Balloon 723 with out of service trams lined up both on Blundell Street and on the fan at Rigby Road.

The Trams in Service

Both days of the weekend saw an intensive tram service run with the bulk of journeys running between Pleasure Beach and Little Bispham although hourly services also ran from Starr Gate to Fleetwood along with some other short-hop trips.

On Saturday 26th September 12 trams ran in service with the first northbound journey in the hands of reactivated Balloon 723 which left depot shortly before 0945. The departure of 723 confirmed that this was the scruffy surprise announced in the build-up to the event with its expired all over advertising vinyls for Sands Venue having now been removed leaving the 1980s Green and Cream livery which had remained underneath. Despite the vinyls having been removed this coat of paint remained in fairly good condition and although it wasn’t in the usual condition you expect of a tram in the heritage fleet it was a pleasing addition for the weekend.

Although 723 was to run the first passenger trip north of the day it wasn’t actually the first tram to leave the depot with Pleasure Beach loop having already become the place to be. This included Twin Car 675+685 which was also making a return to service following a repaint into the Half Green and Half Cream livery with orange pantograph tower. Set 5 was officially launched back into service at Pleasure Beach leaving with a journey through to Pleasure Beach at 1100 with a full load of passengers taking the opportunity to get on board for the first time since 2011.

Other trams to run on the heritage service during the day were Bolton 66, Boat 227, Twin Car 272+T2, Boat 600, Centenary 642, Centenary 648, Railcoach 680, Open Top Balloon 706, Balloon 715 and Frigate 736. The two Centenary Cars were used on the full length Starr Gate to Fleetwood services throughout the day with the other trams being mainly kept to the Pleasure Beach to Little Bispham section (with some shorter journeys as well). In addition Balloon 719 was stabled on the loop line at North Pier where it was used as a shop selling 130th Anniversary goods whilst fellow Modified Balloon 711 was running the depot shuttle between Rigby Road and Starr Gate via Foxhall.

The day didn’t go without incident with Railcoach 680 and Open Top Balloon 706 having to return to Rigby Road with faults. For “Princess Alice” this was saw the trolley head come off which led to the sight of this popular tram being towed back to depot by Unimog 939, a sad end for 706. (And the less said about the Flexity service the better!)

Onto Sunday 27th September and 13 trams were used on the main heritage service with the two stars of the previous day again being used: Twin Car 675+685 and Balloon 723. They were joined by Boat 227 (an extra tram not advertised previously), Twin Car 272+T2, Centenary 642 and Centenary 648 – as per the previous day – with weekend debuts for Box 40, Standard 147, Boat 230, Brush 631, Balloon 701, Balloon 717 and the Western Train 733+734 completing the numbers. Again a similar pattern developed as per the first day of the weekend with Set 5 running a 1100 departure from Pleasure Beach to Fleetwood whilst Centenary 648 was once again running on the Starr Gate to Fleetwood circuit. Unlike the previous day, however, the second tram to operate the full length journeys was Twin Car 272+T2 with Centenary 642 used from Pleasure Beach instead. The depot shuttle was in the hands of Modified Balloon 700 with 719 again at North Pier selling more Blackpool 130 memorabilia.

Behind the Scenes at Rigby Road and Starr Gate Depots

Another of the highlights of the weekend was the chance to see behind the scenes at both the depots. Starting off at Rigby Road tour participants were taken on guided tours around the depot with the first port of call being the Electrical Compound where, on the first day, Boat 230 was waiting for photos. It was then onto the Paint Shop where OMO 8 had been put on display, the Body Shop where Standard 143 could be found and finally the Fitting Shop where two projects for the long-term were: Works Brush 259 and Railcoach 279.

Tour participants were then able to board the depot shuttle which ran from Hopton Road to Foxhall where it used the crossover to head down to Starr Gate Depot. A trip was then made through the Tram Wash (once it had been checked that there were no windows open!). Another guided tour followed around the clean, spacious and light modern depot and on the first day this saw 001 and 007 in the maintenance section of the depot and 014 in the main running shed.

Both days also saw different tram line-ups taking place on both the Rigby Road Depot Fan and on Blundell Street.

Saturday 26th September saw the three remaining Coronation Cars displayed on the depot fan at Rigby Road – the first time in several decades that all three had been shown together – whilst the Blundell Road line-up saw the Fleetwood Heritage Leisure Trust’s Jubilee 761 along with Trawler 737 and Brush 632.

This was followed on Sunday 27th September by Rocket 732, Trawler 737 and Twin Car 676+686 on the depot fan and Modified Balloons 720, 709 and 707 on the Blundell Street. Although it is rare to see all six of these trams out in the open nowadays the rarest of all was the Twin Set which had last run in service during 2004 and has barely been seen outside since.

Although not part of the Blackpool 130 weekend of events mention should also be made of the Illumination Tours which took place on both evenings. One of the effects of the withdrawal of the Trawler for 2015 is that more “trams of interest” see use and that is exactly what happened over this weekend.

Saturday 26th September saw Twin Car 675+685 make its debut on tour duty as one of five trams to be used. It was joined by the Illuminated duo of the Western Train and the Frigate and Balloon Cars 701 and 717 with all five trams running two tours a piece on what was a busy night in Blackpool.

The highlight of the following evening was the use of Boat 230 (running two tours) with Western Train 733+734 and Balloon Cars 717 and 715 also running tours. Unfortunately there was a large gap in the arrival of trams at Pleasure Beach to start tours which saw a large queue develop around the loop. In addition to these trams the Frigate was also out being used on a Private Hire.

The Blackpool 130 events weekend was always going to be the most ambitious heritage tram operation since the upgrade but on the whole it seemed to be a huge success with the warm and sunny weather adding to the whole spectacle. There may have been some things which possibly didn’t quite go according to plan but in an event as ambitious as this that was always likely and it didn’t detract from what was going on elsewhere.

And surely the Saturday when 32 different trams carried passengers (all 16 Flexity2s were used in service alongside the 12 heritage trams, 1 B fleet Balloon and 3 additional trams out for Illumination Tours) must have broken records for the number of trams in service post-upgrade? (Mind you the Sunday saw 31 trams out carrying passengers albeit one was on a Private Hire – not that shabby either was it!)

* A full Photographic review of the Blackpool 130 events – including the two days leading up to the weekend – will follow on British Trams Online on Thursday 1st October. And if its photos you are looking for why not take a look at our Facebook page where there are numerous images taken during our LIVE coverage. 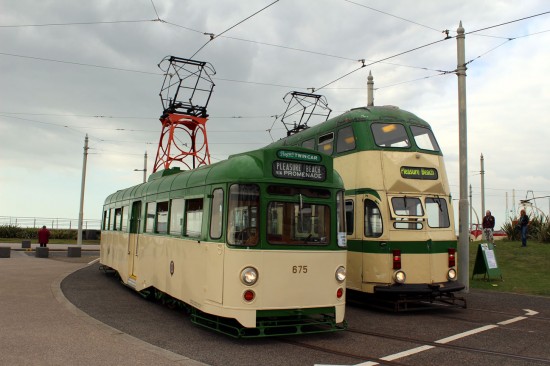 The two returnee trams over the weekend are seen together at Pleasure Beach on 26th September. Twin Car 675+685 and Balloon 723. 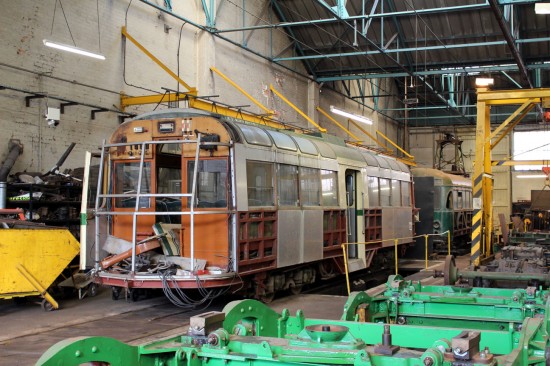 Inside the Fitting Shop Railcoach 279 and Works Brush 259 are seen. Both trams had been moved in here for display purposes only and are both described as long-term projects. 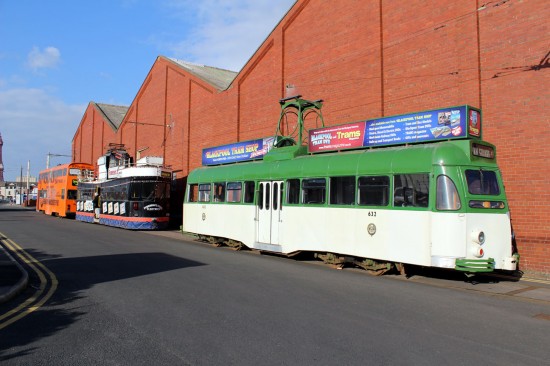 The Saturday line-up on Blundell Street consisted of Brush 632, Trawler 737 and Jubilee 761. 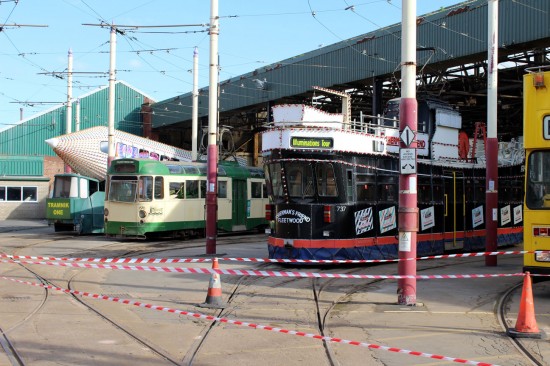 Sunday 27th September saw this line-up on the Rigby Road Depot fan with Rocket 732, Twin Car 676+686 and Trawler 737 posed for the cameras. (All Photographs by Gareth Prior)