One of the many highlights of the fantastic weekend of events held to celebrate the 130th anniversary of the Blackpool tramway over the weekend of 26th & 27th September, was undoubtedly the return to service of Twin set 675+685. The duo last ran in passenger service back in November 2011 and since then their red and yellow Metro Coastlines livery has been replaced by a more traditional colour scheme better suiting their new role in the operational heritage fleet.

675+685 have spent most of the summer hidden away in the workshops, but finally emerged in the days leading up to the main event for a test run. The trams have been superbly repainted in the basic yet smart green and cream livery which was first applied to the Twin cars in the late ’60s, replacing the earlier all-cream livery. It was a long-lasting design, with the last of the type not losing it until winter 1991/92 when the green skirt livery took over the whole class. A few variations did exist in the interim, but 675+685 have received the earliest version: the top half of both trams, including the window surrounds and roof side, are painted green whilst the bottom half is a pale shade of cream. Its most striking feature is probably 675‘s orange pantograph tower, something which has never before been recreated on a tram even though the 1970s livery has been applied to various other cars over the years. Both trams sport Blackpool Corporation crests on the side panels and the glass ‘Progress Twin Car’ legends above the destination boxes have been repainted green. Authentic gold fleet numbers have been placed on the dash panels of both trams and also above the platform doors; these were sourced from some old stock which had never been used! The smart appearance has been completed by replica black and white destination blinds and the end result looks fantastic.

The rejuvenated Twin set was unveiled to the public on Saturday 26th September. After being posed on the Pleasure Beach outer loop in the morning, it departed at 1100 with its first passenger journey, which was a trip to Fleetwood Ferry – its first since 2009. The cars then operated over the weekend and even worked an illumination tour on the Saturday evening. Clearly having been confined to the depot for so long Set 5 did not want to go back in, and hopefully it will now become a regular sight for the remainder of the season. Incidentally as well as being this Twin set’s first use for nearly four years, the weekend also represented the first time that two Twin cars had been running together since 2011 and this is yet another reminder of just how far the heritage operation has come in a fairly short space of time. Welcome back 675+685! 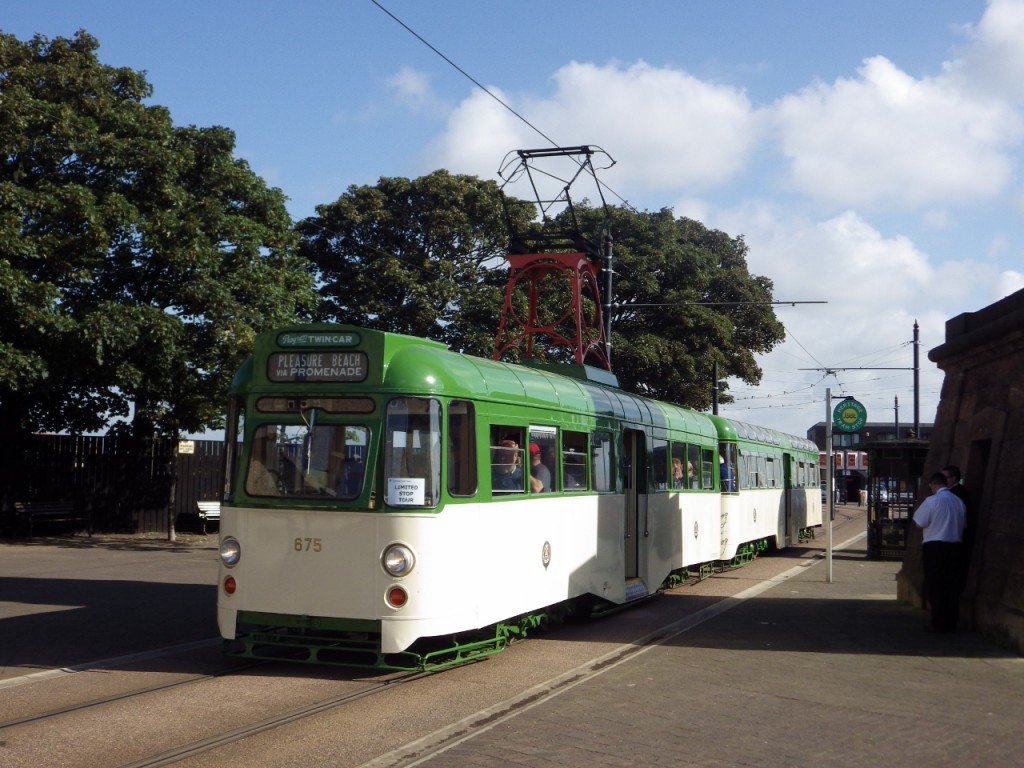 Having just run to Fleetwood for the first time since 2009, 675+685 pose on Pharos Street before returning south on their inaugural journey after being launched into the heritage tram fleet. 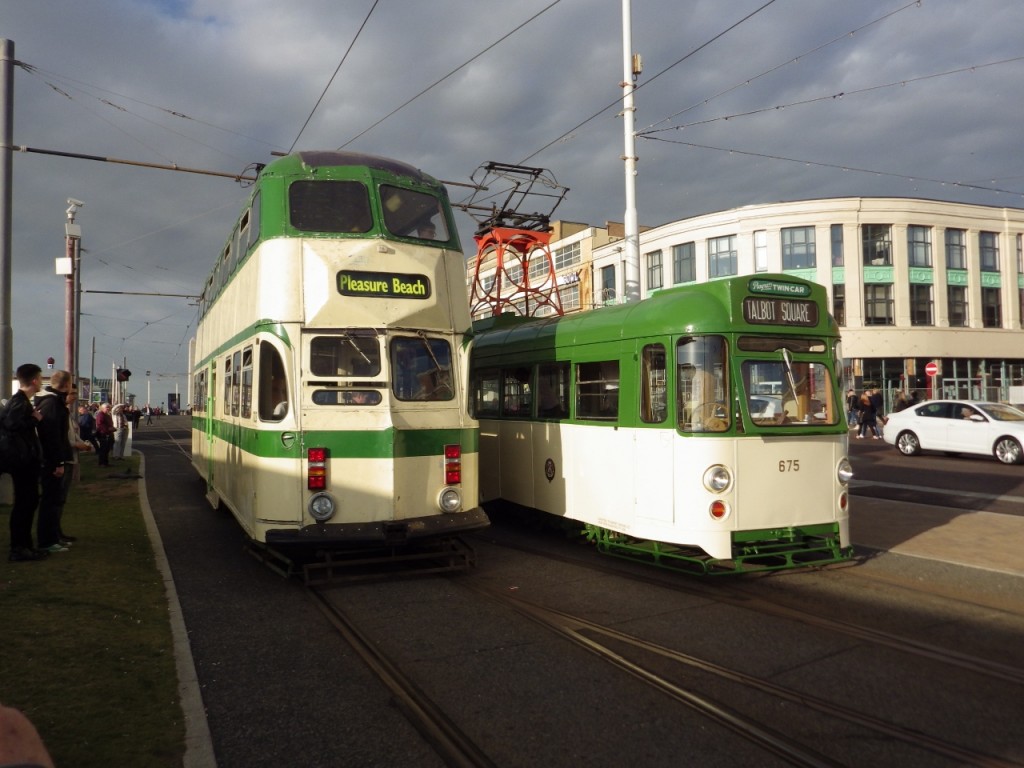 Smart meets scruffy as 675 is passed at North Pier by Balloon 723 which also made a welcome return to service on 26th September, albeit in less pristine condition than the freshly painted Twin set following removal of its advertising vinyls to reveal the green and cream livery hidden underneath since 2010. 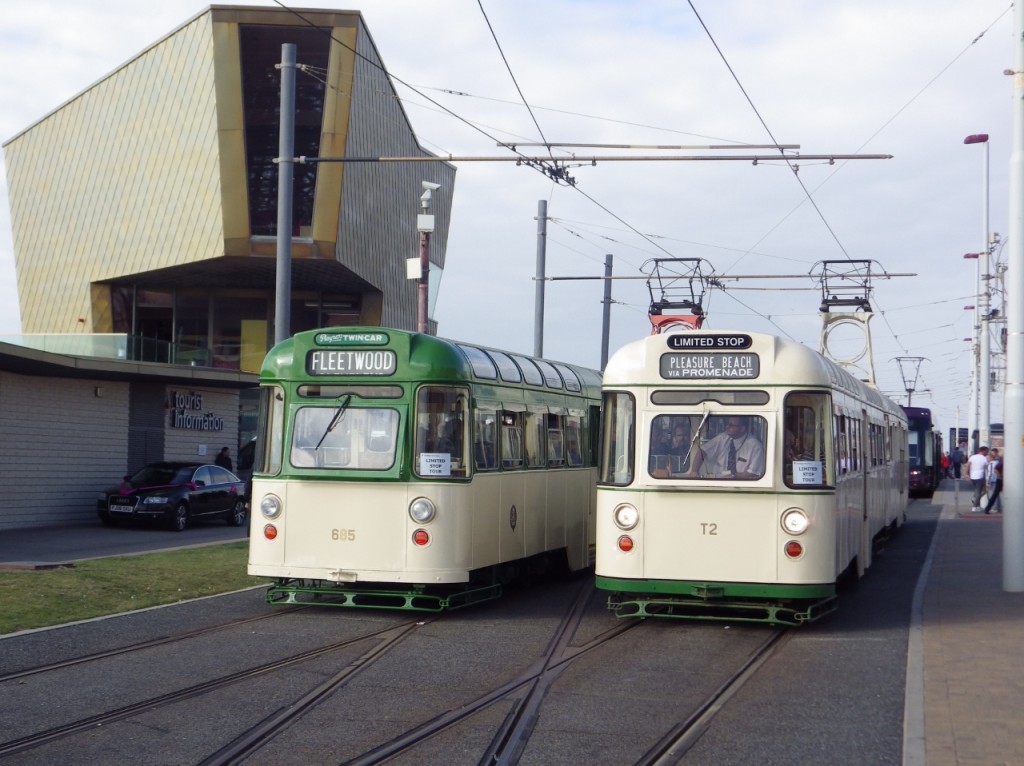 One of the most in-demand shots of the weekend was that of two Twin cars together. Here both trailers, 685 and T2, pass at North Pier as the former heads for Fleetwood for the second time on 26th September. 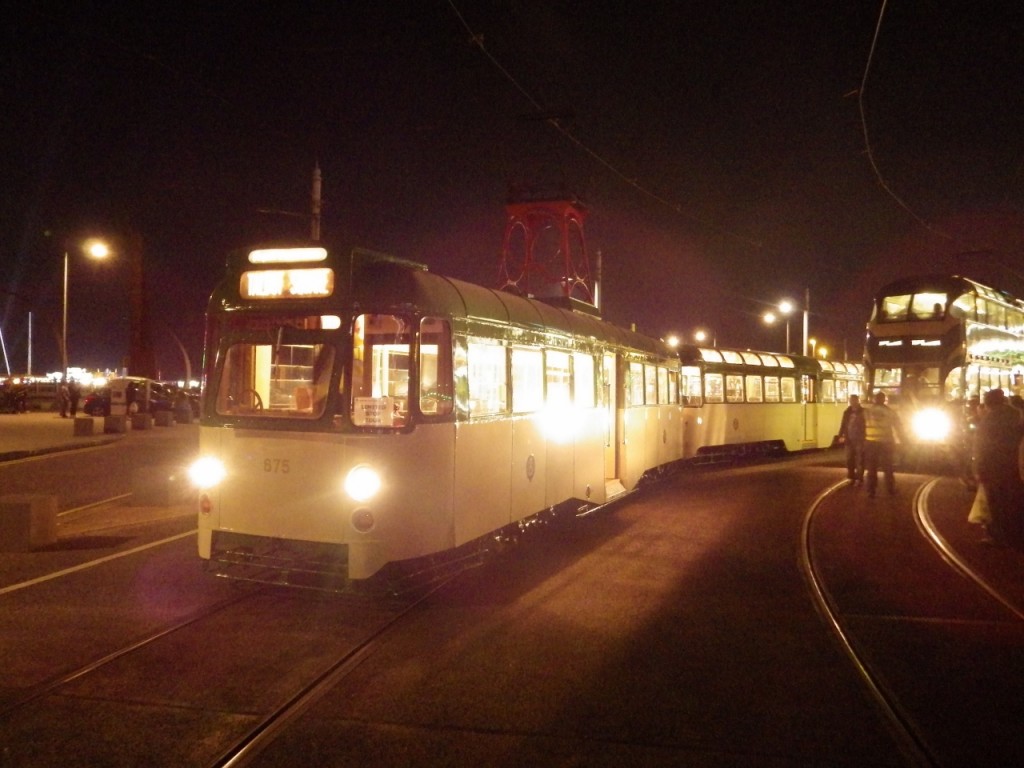 An amazing end to 675+685's first day back in service as the set arrive at Pleasure Beach ready to operate an illumination tour! (Photos x 4 by Paul Derrick)