Final preparations in place for ‘Blackpool 130’

Many enthusiasts are currently descending on Blackpool, ready for the weekend’s spectacular events to celebrate 130 years of the famous promenade tramway. A full provisional list of which trams are due to run on both days has now been published online, and one of the surprise stars of the show has also been confirmed – Balloon 723, which will be making its first appearance in passenger service since 2013!

Presumably for practical reasons, not every operational heritage tram will be used on both days but across the weekend a very impressive total of 21 trams are due to operate and that is certainly something to savour!

In addition, depot shuttles will be worked by car 711 on the Saturday and 700 on Sunday, whilst 719 will be stationed on the spare track outside the wedding chapel at North Pier on both days, where it will be used as a shop selling special limited edition 130th anniversary souvenirs as well as copies of your writer’s own book ‘Blackpool Trams – Where Are They Now’ with all proceeds going towards the heritage trams’ upkeep. This will ensure that the ‘B Fleet’ Balloons do not miss out on the weekend’s fun, whilst the use of illuminated cars in daylight will also be a rare treat! Crews will be swapping between the trams in service on each day, providing plenty of variety and there should also be lots of impromptu line-ups on the loops at Pleasure Beach with so many cars being out at once!

As mentioned previously, a number of non-operational trams will also be displayed both on Blundell Street and outside Rigby Road depot itself, and several of these have been shunted over the preceding week in preparation for their public appearance, including OMO 8, Standard 143, Twin set 676+686 and Jubilee car 761. Some of these trams have been placed in the various workshops to add further interest for those who will be taking a guide tour around the complex. Balloon 723 has also been treated to a heavy clean and it is now confirmed that this tram is the previously mentioned ‘scruffy surprise’, which was certainly the subject of much speculation! This tram has only run twice on heritage tours since their inception and has not turned a wheel in service since May 2013, when it carried an all-over vinyl advert for the Sands Venue which was looking rather sorry for itself by that time. The chance to ride on this car again will no doubt be much appreciated and will provide a nice contrast with the more traditional Balloon cars in service as well as its sisters which have been more extensively modernised in recent times.

There can be no doubt that the weekend ahead will be fantastic and should be the pinnacle of an outstanding year for Blackpool’s heritage tram tours. For those who can’t be there in person, British Trams Online will be providing live coverage of both days on our Facebook page – don’t forget that anyone can view this content although you have to join Facebook if you wish to post comments on the photos we post. 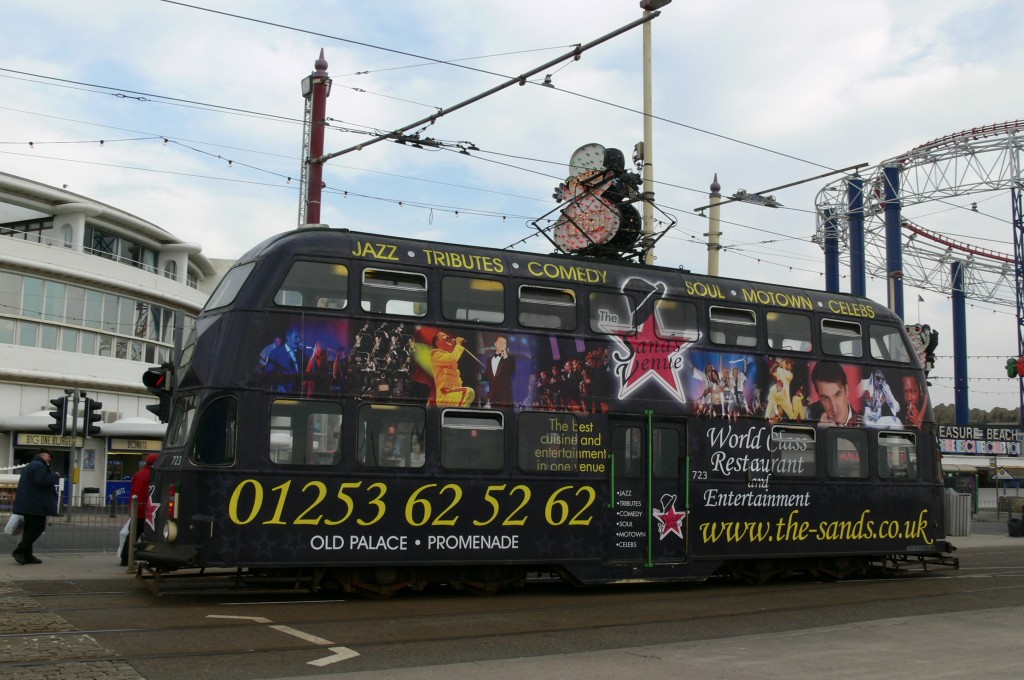 The identity of the 'scruffy surprise' running in Blackpool this weekend has finally been revealed - its 723! Here the tram is seen looking quite smart rather than scruffy in its then newly applied advert livery back in 2010. (Photo by Andrew Waddington)

2 Responses to Final preparations in place for ‘Blackpool 130’