The school holidays are approaching the end (or in many cases have already got there) which means things start to settle down a bit across the British Isles as we bring you our regular round-up of just when and where you can enjoy a ride on a traditional tram. Daily operation in Blackpool is now at an end with daytime operations now restricted to weekends again (plus the October half-term week) but from Saturday 5th September it is nightly operation as the 2015 Illumination Tours begin. Elsewhere the next special event on the agenda is the Trams, Traffic and Work Vehicle event at the Crich Tramway Village (Saturday 5th and Sunday 6th September) and then we are in to a busy few weeks as we have tram launches, anniversary celebrations and intensive tram operations at three locations. But that is in the future so let’s take a look at where you can go for a ride…

The tramway is now fully reopen.

Until Sunday 6th September – Timetable D (services every 30 minutes between 1015 and 1545). Evening services run every Wednesday and Friday for summit diners. 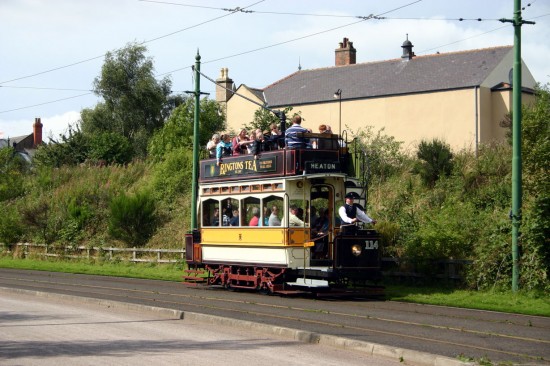 Newcastle 114 leaves the Town at Beamish on 1st September 2012. (Photograph by Gareth Prior)