A spectacular welcome for 280 at Heaton Park

The Heaton Park Tramway have proved many times over the years that they know how to put on a good event – and a reminder of that fact came again on Sunday 26th April, when recent arrival Blackpool 280 was officially welcomed into the operating fleet. To mark the occasion, a special Blackpool-themed event was held featuring all five trams from the seaside town currently on site, as well as a few unexpected treats!

The first surprise of the day came very early on, when Blackpool Balloon 702 was moved from its normal resting place inside the Lakeside Depot and towed to the opposite end of the tramway by Replica Vanguard 619, ultimately being positioned in front of the Middleton Road Depot for display. This was the first time that 702 had ventured to this end of the line since its arrival over a year ago, and it was also treated to a wash in order to improve its appearance for the visitors who were obviously keen to admire it. Meanwhile, Railgrinder 1 was also extracted from the new depot and placed on display on the siding at the old Lakeside terminus; its recent withdrawal due to motor defects meant that it would venture no further on this occasion.

The morning tram service was operated by Blackpool cars Vanguard 619 and Brush Railcoach 623, with the star of the show, Ex-Towing Railcoach 280 posed on the spare track opposite the Middleton Road Depot. A welcome extra attraction was provided by a group of folk musicians and clog dancers who performed a number of times during the day, including one time aboard 619, providing a welcome change from the usual style of enthusiast events which seemed to be enjoyed by many passers-by.

The first major event of the day involved a mini-procession and a series of photographic opportunities featuring the four passenger cars hailing from Blackpool. In preparation for this, 619 was again commandeered to shunt 702 and the odd couple then performed a parallel run along the double track with 280. After some further shunt moves, 623 was also driven to the park gates and then a short parade ran from this location, led by 702 and 619, with 280 behind and 623 bringing up the rear. Better still, once the trams had all passed the old depot they were all halted on the hill for a very unusual photo stop, with the quartet making an incredible sight. Whilst this was all happening, Manchester 765 was tasked with maintaining a reduced service from Lakeside to the top of the hill and was even briefly stood in front of the Blackpool cars, to give an incredible line-up of five trams. The display was then dissolved with 619 pushing 702 back to Lakeside, although moving the Balloon car uphill initially proved rather a challenge for it until some extra sand was brought! Meanwhile, Blackpool 280 and 623 performed another parallel run along the double track to Middleton Road before entering service, with 280 performing its first ever public run at Manchester. Unlike previous launch events, no speeches or ceremony took place although the preceding events definitely provided a suitable welcome to be remembered! 765 then retired, being placed in the space outside Middleton Road Depot vacated by the Balloon, allowing the three Blackpool cars to maintain the service for the rest of the day.

The final advertised photo opportunity was staged outside Lakeside Depot at 1530, where Balloon 702 had been deposited. This tram was then posed along with 280 and 623 to give a stunning line-up of three Blackpool streamliners together, a sight not previously possible at Heaton Park and which put the three completed tracks into the shed to good use. The operational cars then re-entered service shortly afterwards, with all three trams carrying good numbers of passengers well into the afternoon. Additional funds were raised by the sale of a souvenir programme with all monies raised going into the tramway’s special fund for its Blackpool tramcars, and as is usual with Heaton Park events, there was also cake!

The Blackpool day was undoubtedly a resounding success for Heaton Park and everyone involved in running the tramway on the day clearly worked exceptionally hard to keep the visitors happy. Many positive comments were heard throughout the day and, remarkably for an event of this calibre, everything ran almost exactly to time! For anyone who missed this very special day, the tramway will be staging a further Blackpool tram event on the weekend of 8th & 9th August, whilst October will hopefully see the long-awaited return to service of Hull 96. 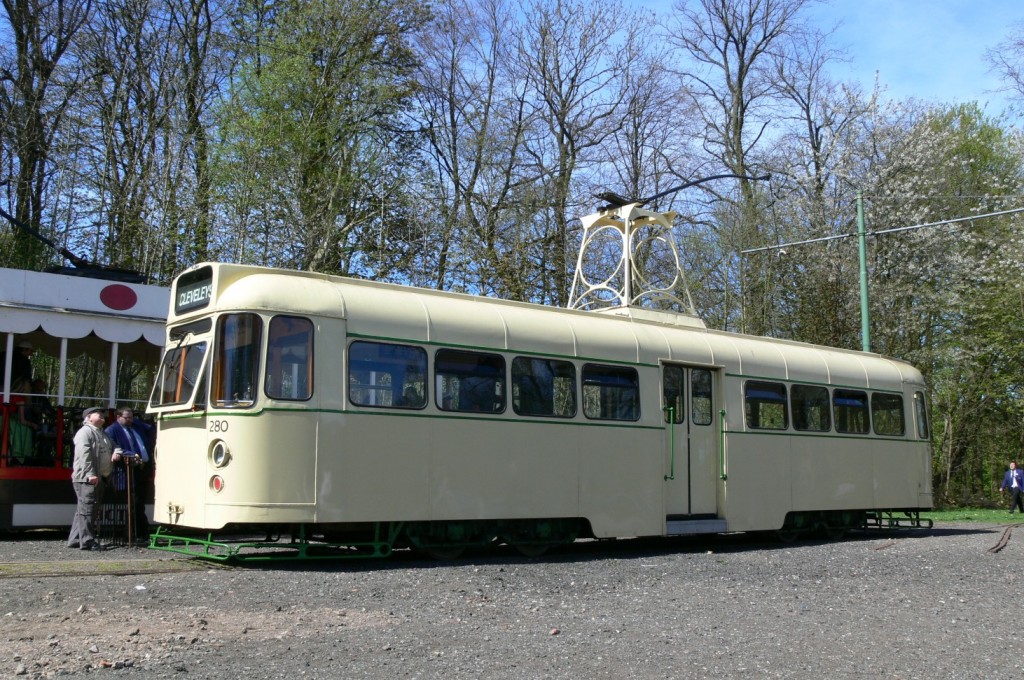 Blackpool 280 basks in glorious sunshine at Lakeside on its first day of service at Heaton Park, 26th April 2015. 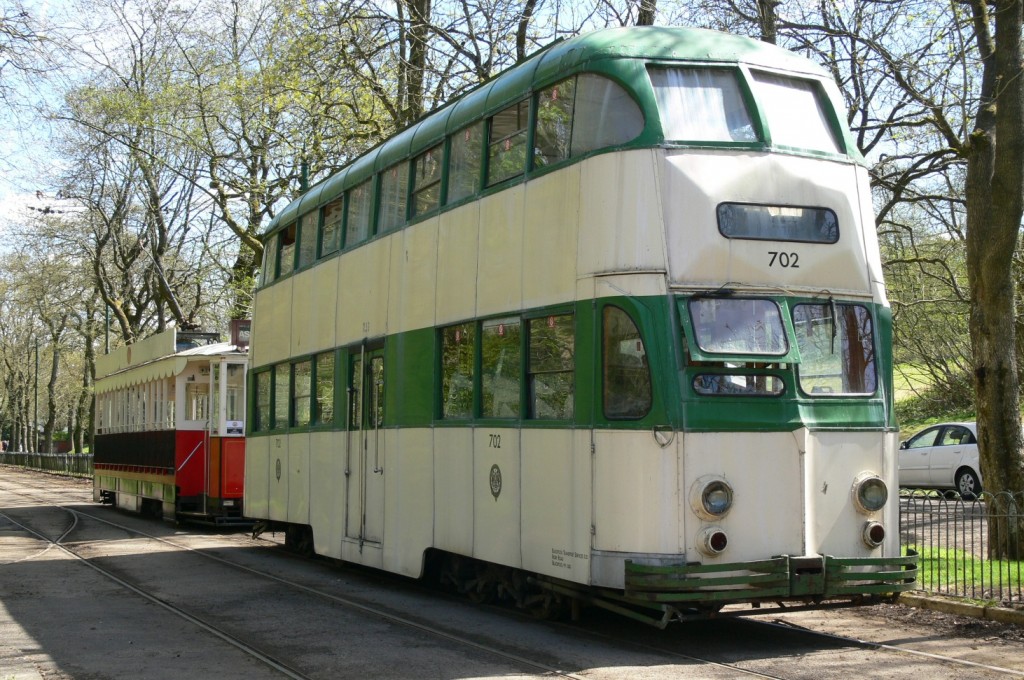 Blackpool Balloon car 702 makes a very rare appearance on the main line with a little help from Vanguard 619. 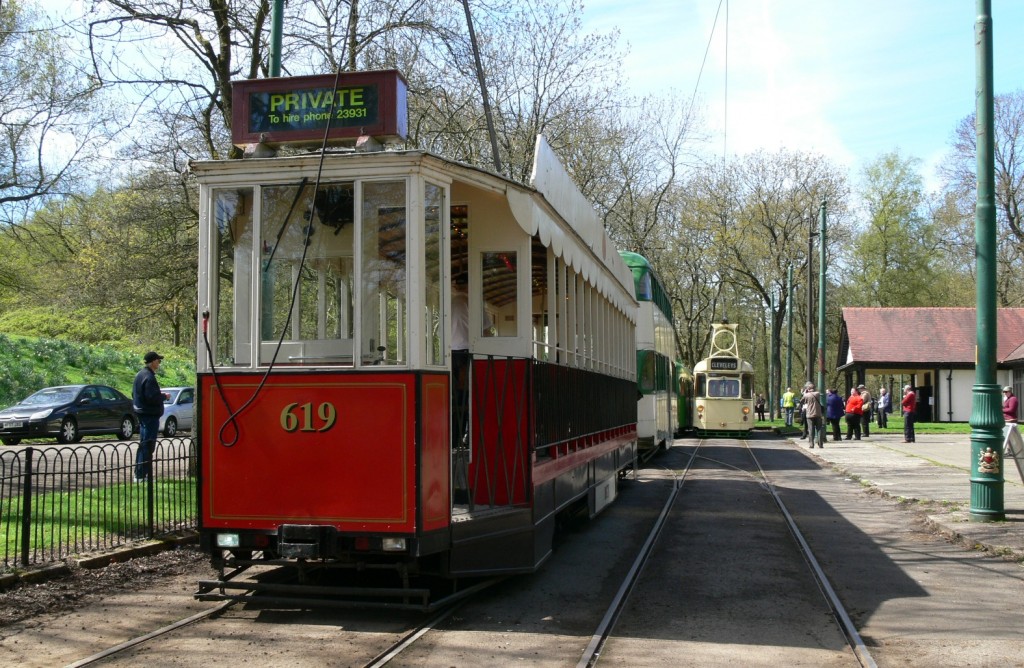 Preparations get underway for a Blackpool tram procession as 619 shunts 702; in the background, 280 and 623 await instructions. 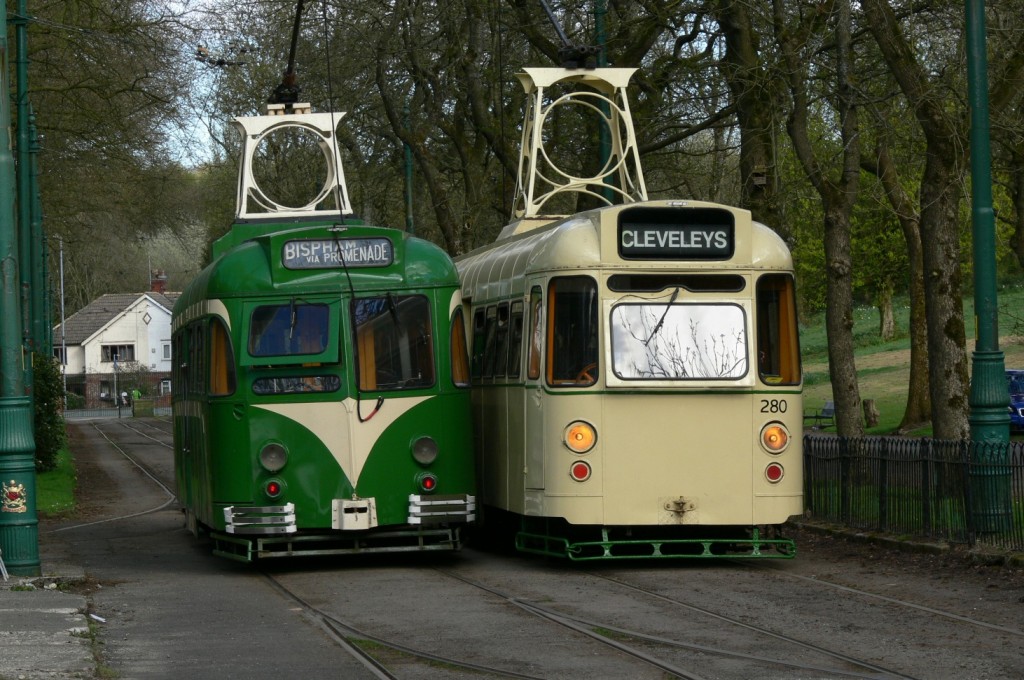 623 and 280 are seen passing on the double track section of the tramway as the day's events draw to a close. 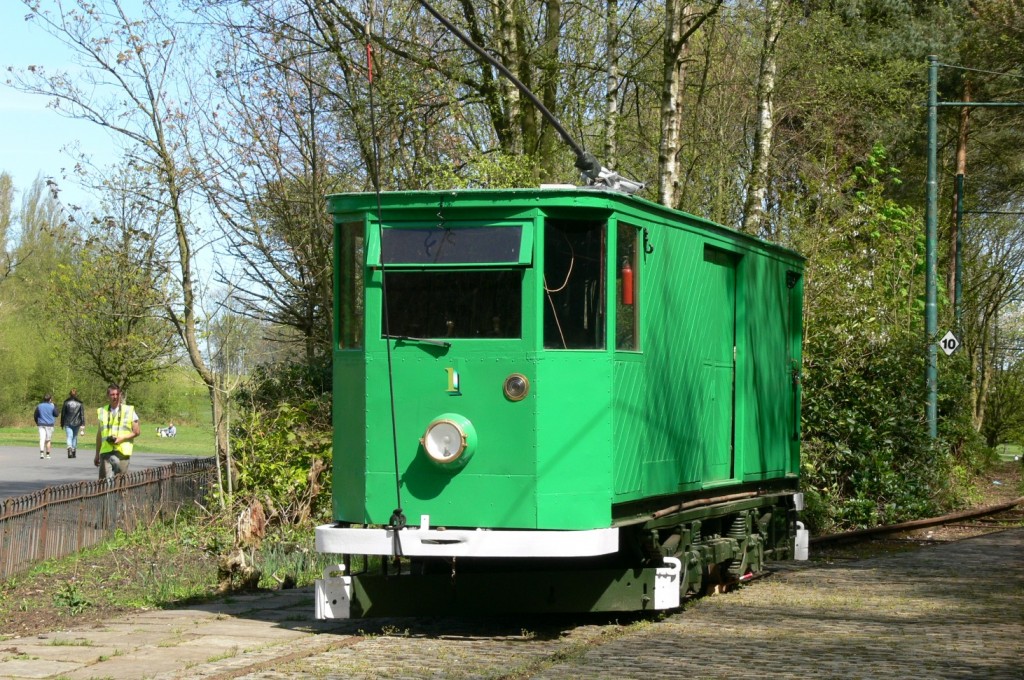 Railgrinder 1 was the only Blackpool tram on site not to feature in the procession, although it was brought outside and spent the day displayed at the old Lakeside siding. (All photos by Andrew Waddington)

This entry was posted in Event Reviews, Heaton Park Tramway. Bookmark the permalink.

2 Responses to A spectacular welcome for 280 at Heaton Park