Provisional plans for the heritage tram operation in Blackpool over the three day May Day Bank Holiday weekend have now been unveiled, with a few changes being made taking into consideration feedback received from customers at Easter. The most notable change however, is that the enhanced Gold service will now operate on Sunday 3rd May as well as the Bank Holiday Monday, meaning that two extra trams will now operate on that day.

The weekend’s events commence with a four-car heritage service on Saturday 2nd May, with the trams mostly operating between Pleasure Beach and Little Bispham. In addition, the Fylde Tramway Society have booked two tram tours to complement the service, and seats for these should be available on the day to non-members, on a first come first served basis. The first of these features Balloon 715 which will be making its inaugural trip since being repainted in 1990s livery. The tram is scheduled to depart from North Pier at 1100 and will first head to Starr Gate, before travelling through the wash plant with passengers on board as a rare extra treat. The car will then head to Fleetwood before FTS members are invited to disembark at Cleveleys on the return leg for their AGM. After this, Twin set 272+T2 will collect guests from Cleveleys at 1600 and will perform a full system tour, running until approximately 2030. Note that additional fares will be charged for these tours; heritage day passes cannot be used on them.

The enhanced gold service will then return on Sunday and Monday, with a few minor changes. Following comments from passengers over Easter, it has been decided to run longer tours from the Pleasure Beach every half hour from 1000, in order to give people the chance to plan their day of riding ahead. One in three of these journeys will run to Fleetwood; these are scheduled to depart at 1000, 1130, 1300, 1430 and 1600. The others should run to Little Bispham, with extra short runs slotting in between to a variety of destinations such as North Pier, Cabin and Bispham. This gives a guaranteed half hour frequency on the promenade with runs through to Fleetwood every 90 minutes, and hopefully combining this schedule with the additional ‘specials’ will keep everyone happy!

The planned tram output has also been announced for both of the Gold days. Sunday 3rd May is dubbed ‘Balloons & Boats Day’, with Boat cars 227 and 230 both rostered to run along with ‘Princess Alice’ 706 and three enclosed Balloons in contrasting colours – red 701, purple 711 and green 715! Finally, Monday 4th May has the loose theme of ‘Blackpool Classics’ with six very different trams expected to run. The chosen six are Box 40, Standard 147, Twin set 272+T2, Boat 600, Brush car 631 and Balloon 715. Naturally all advertised vehicles are subject to change due to availability and other operational requirements, although Blackpool Transport and the heritage team will aim to deliver as planned.

As per usual the next Bank Holiday weekend should provide plenty of interest and entertainment for the many fans of Blackpool’s historic trams and will hopefully be another great success – and hopefully the fog of Easter will not be repeated!!! 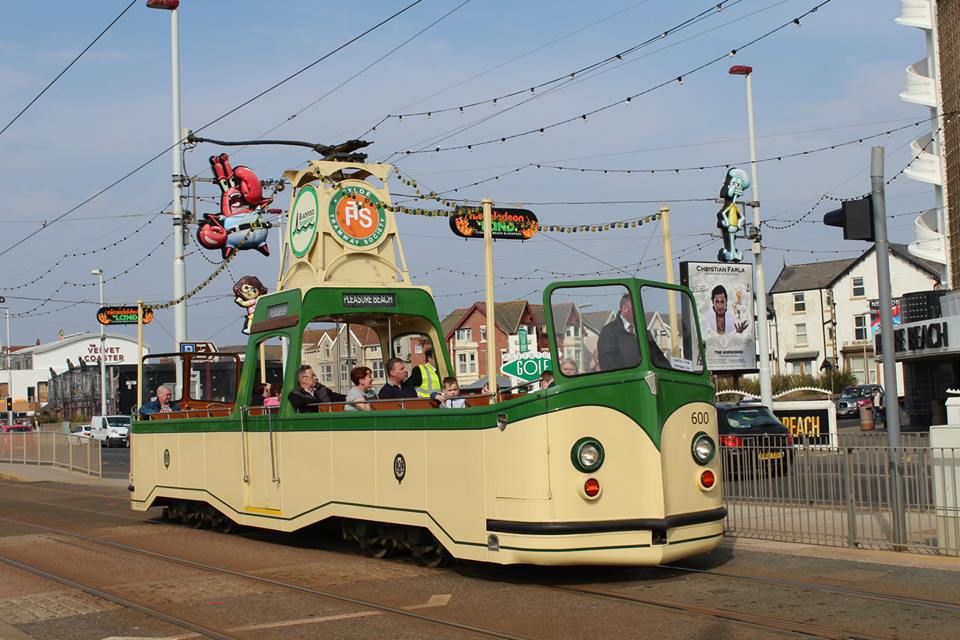 One of the classic Blackpool trams expected to operate on May Day, Open Boat 600 is seen at Pleasure Beach whilst operating on the heritage service a few weeks ago. (Photo by Bradley Jones)