Good and bad news from the Crich workshop

There have been a few interesting developments going on within the confines of the Crich workshop, as overhaul work nears completion on London County Council 106 and gets seriously underway on Liverpool 869. Unfortunately, it has come to light that 869 is suffering from some previously undetected corrosion on its axles, but on a lighter note, the work on 106 is nearing the point where the tram can be commissioned for test running.

Since being lifted off its trucks during the summer, there has been some good progress made on the overhaul of various mechanical components on Liverpool 869. However, close examination of the axles has revealed some areas of corrosion which has progressed to the extent that all four axles will need to be replaced. The motor suspension bearings have also been declared unfit for further use and will also require replacement. Meanwhile, the upper deck interior is currently looking rather messy with work on the seating getting started, this being one of the main areas identified for attention at the start of the overhaul, and the seats have all been removed. New seat cushion frames have already been made in-house and will shortly be sent for re-covering once a suitable material has been chosen. It is a little disappointing that such costly work will be needed, especially as 869 was the subject of extensive rebuiliding before its launch into museum service in 1993, but hopefully the current investments will ensure that it will be fit for many more years of service once the work is completed.

Meanwhile LCC 106 continues to occupy the wash bay area of the workshop as a full repaint in its attractive cream and maroon livery nears completion. The tram has recently regained its fleet numerals and other livery decals and signwriting are being added. If the current rate of progress continues then it should be possible for 106 to emerge from the works for testing before the end of the 2014 season, ahead of an expected return to passenger use early next year.

In addition to 106 and 869, London Transport 1 also remains in the workshop in the early stages of being stripped ahead of a major restoration, although concentration on other projects and the desire to produce detailed documentation relating to the conservation of this unique tram have slowed progress in this area. Recent work has seen much of the car’s beading removed and the interior is now in the early stages of being dismantled. In addition, Blackpool 762 is likely to spend further time in the works over winter to remedy a few minor problems which have been encountered since its entry into service last month, including a recently discovered fault with the DIP (driver in position) pedal. Hopefully this will allow this tram to see more frequent and reliable use from next year onwards, justifying the huge amount of time and effort already spent on it since its arrival from Blackpool almost three years ago. 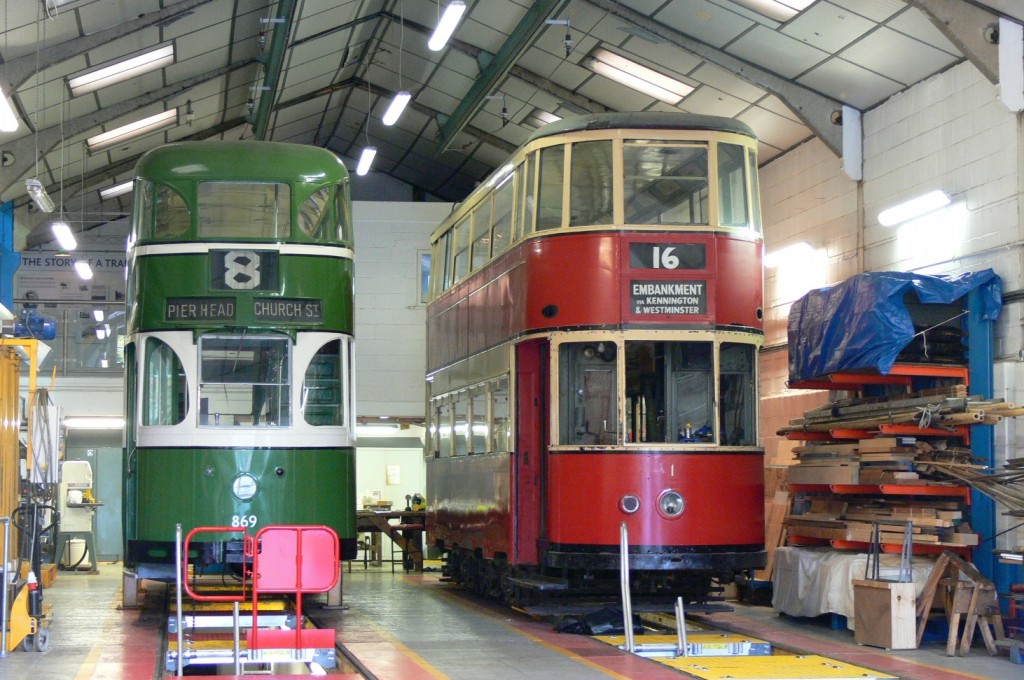 A view of Liverpool 869 and London Transport 1 side by side in the otherwise largely empty workshop on 12th October; the former resting off its trucks for overhaul, and the latter being stripped ready for a thorough restoration to take place. (Photo by Andrew Waddington)

3 Responses to Good and bad news from the Crich workshop