After approximately six weeks carrying a bright and pink vinyl wrap advert for Magnum
Infinity, London Tramlink’s 2548 has returned to fleet livery. The tram was last seen in its advert on Saturday 12th May but by Tuesday 15th May was noted in service in the lime green, blue and white Tramlink livery. Hopefully – from the viewpoint of a photographer anyway! – this will be first of several trams to receive all over adverts in the future on Tramlink as it certainly adds to the colour of the modern tramway systems. 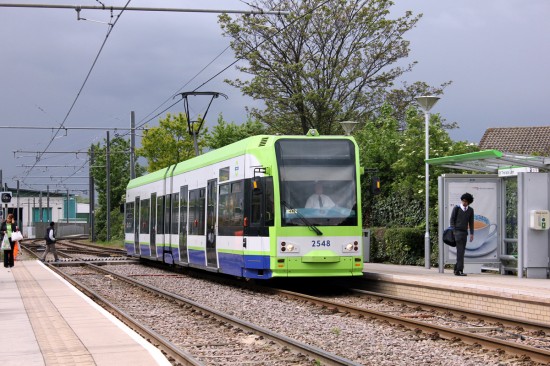 After barely 6 weeks pretty in pink, Tramlink 2548 has returned to fleet livery as seen here at Therapia Lane on 15th May 2012. (Photo: Ian Buck)