What to know when and where you ride on heritage trams over the next few weeks? Well if you do you have come to the right place as this is your one stop guide to heritage trams in the UK and Isle of Man! This weekend will see the Crich Tramway Village hosting another special event with an Edwardian weekend (12th and 13th July) which will include trips on horse car Sheffield 15 (Sunday 13th only). Then attention will be turned to Blackpool, or to be more precise Fleetwood, again on Sunday 20th July when the annual Transport Festival takes place which will include heritage tram trips between Fisherman’s Walk and North Pier.

The Red timetable is in operation daily from Saturday 12th July until Sunday 31st August. First tram leaves Seaton at 1000 and then every 20 minutes until 1720 with returns from Colyton starting at 1030 until the last departure of the day at 1750. 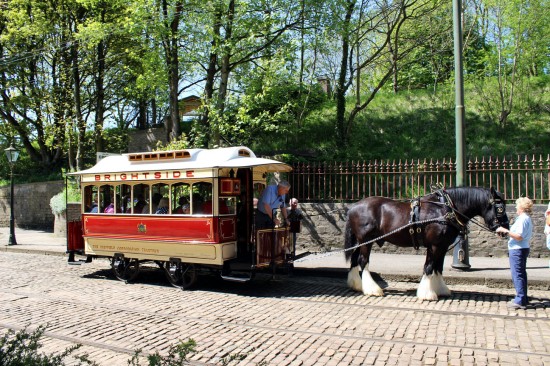 Sunday 13th July will provide a rare chance to enjoy a horse tram ride on the UK mainland when Sheffield 15 will be in use again at the Crich Tramway Village as part of the Edwardian Weekend. This view shows 15 during one of its last periods of operation at the Best of Sheffield event: 17th May 2014. (Photo: Gareth Prior)