It is not only Nottingham where there is due to be an increase in testing and driving training of their new trams as it is expected that driver training on the Urbos 3 trams on Midland Metro is due to start from Monday 28th April. Each driver will have four days on the new trams with sessions taking place each night between 1900 and 0300.

Although no date has yet been set for an entry into service for these new trams it could be that they will carry passengers sooner than originally thought as it is believed that there is currently a bit of a lack of spares for the original T69 trams. As already reported on these pages 01, 02 and 03 have all been withdrawn from service and 04 is also available for limited use.

04 last ran a full days service on 28th February but did operate a single return service between Wednesbury and The Hawthorns on Saturday 12th April in connection with a West Bromwich Albion home fixture. It is understood the tram has severe wheel flats and requires a full replacement set; a limited number have now been acquired so it may be that the tram receives these to enable it to return to the road.

05 has also recently spent a few days out of service and was reported to be offering a very rough ride ahead of this period on the sidelines. It is now available for service again and joins 06–16 in operating the service between Birmingham Snow Hill and Wolverhampton St George’s. 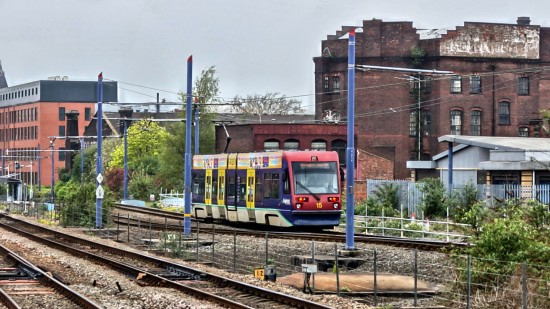 15 comes to a halt on the approach to Birmingham Snow Hill with the points not set correctly for it to continue into the terminus. 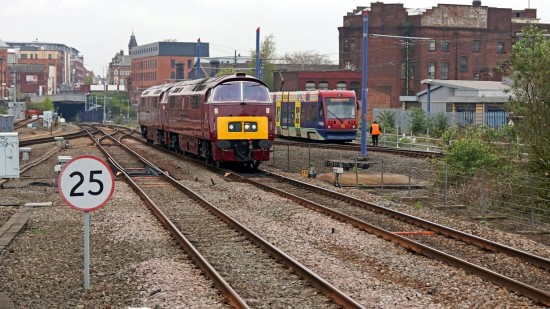 The driver of 15 returns to his tram having reset the points manually as two preserved diesels - D1015 and D1062 from the Severn Valley Railway - pass on their way to Tyseley. Ironically in light of the problems Midland Metro trams have been having recently with their wheels the diesels were going to have their tyres turned because of wheel flats! (Both Photos: Andy Walters)