3049 has become the first tram to carry passengers in Rochdale Town Centre for over 80 years (12th November 1932 was the closure date of Rochdale Corporation Tramways) with the official opening of the latest Manchester Metrolink extension. The first departure from Rochdale Town Centre was shortly after 0600 on Monday 31st March and now means that the Metrolink network has reached 48.5 miles (78km) with 77 stops open to the public.

Services from Rochdale Town Centre head to East Didsbury via Manchester City Centre and will run every 12 minutes for most of the time, although this frequency drops to every 15 minutes on Sunday evenigns. Most services are formed by single M5000s although a number of journeys are now operated with double units due to high demand.

This is likely to the last extension of Manchester Metrolink to open for some time with next year expected to be the earliest any further lines may see trams in service. It is hoped that part of the Second City Crossing (2CC) to Exchange Square may open in 2015 with the Airport line in 2016 and the full 2CC in 2017. 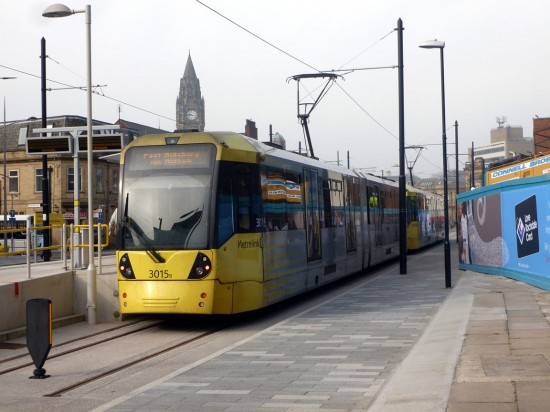 3015+3025 wait at Rochdale Town Centre for depature with a service to East Didsbury on the first morning of services - Monday 31st March. (Photo: Ralph Oakes-Garnett)