Since arriving at Beamish Museum last week, a considerable amount of work has been carried out on Blackpool Railcoach 680, in order to prepare this tram for service at its new temporary home. As will be remembered, this car has been loaned to the museum by its owners, the Manchester Transport Museum Society, and is expected to make its preservation debut at the North East.

Unfortunately due to the delays in getting the tram moved to Beamish and the need to carry out some remedial work on it following a lengthy period of storage at Blackpool, it has proved impossible to commission 680 in time for Christmas. Although this was the main original purpose for it being borrowed, it will still be a very useful addition to the museum’s working tram fleet for the winter and early spring period. At present, it is hoped to have 680 in service early in 2014 and it should remain at Beamish until after the Great North Festival of Transport, when it will hopefully be joined by Stockport 5 for what is likely to be one of the best tram events of next year.

Early work on 680 has seen the trolley tower being shot-blasted and repainted in the same shade of cream as the remainder of the tram, whilst new trolley planks have been prepared for fitting. Some electrical testing has identified the need for some repairs which are now in hand, and servicing of the controllers and compressor is also underway. The beading has also been rubbed down ready for painting in green, with the centre platform handrails also being repainted green to match, which should look a good deal better than the previous bright yellow! Blackpool Transport have kindly provided some bell pushes to replace those which had been removed from the car during its time spent out of action, but a number of seat swabs are also missing, believed to have been taken by souvenir hunters, and will have to be replaced using parts from other MTMS trams.

Some initial testing of the car should be undertaken before the year is out, before work resumes in the New Year, which will hopefully allow this popular tram to return to service in the near future, providing some welcome winter cheer at Beamish! 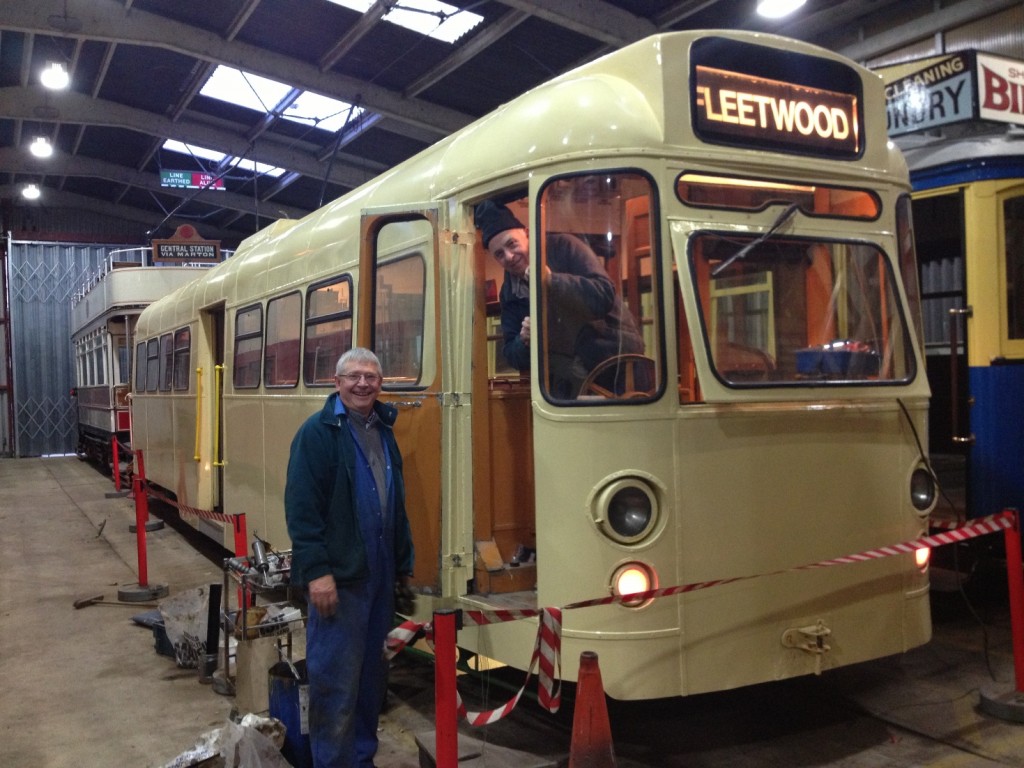 A recent view of 680 in the tram shed at Beamish as work to commission it for service progresses. Alongside is Oporto 196, recently returned to use following motor repairs. (Photo from the Beamish Transport & Industry Blog)

5 Responses to Update on Blackpool Railcoach 680