Posted on Saturday 12 October 2013 by Gareth Prior

The second of the 22 Alstom Citadis trams being constructed for Nottingham Express Transit has now arrived at Wilkinson Street depot following its transport from Spain. Like the first tram it was transported by sea to Southampton Docks in Southampton and then resumed its journey by road to Nottingham.

It is presumed that this tram will be numbered 217 in the NET fleet but no external identification is carried on the trams when they are initially delivered to Nottingham. The tram joins 216 in Nottingham and will now undergo initial commissioning work before testing and eventual introduction into service, which is not expected until 2014. 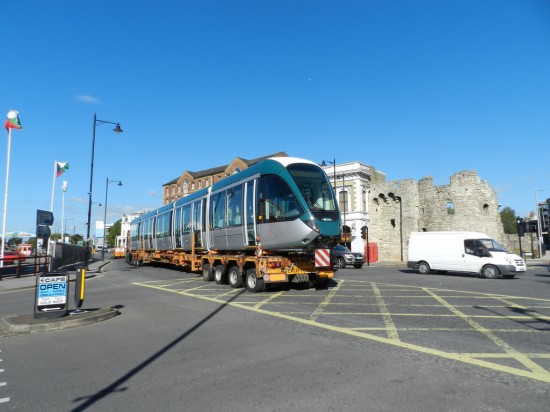 The second of the Citadis trams for Nottingham Express Transit makes it way from the Docks at Southampton on its way north to its new home in the midlands. (Photo: Graham Tiller - http://www.flickr.com/photos/77175657@N00)