What does the future hold for Cardiff 21?

The latest issue of the Tramway Museum Society Journal contains a brief but potentially interesting snippet of information regarding Cardiff 21. This double-deck horse tram has been on loan to the museum at Crich from the Nantgarw Collection Centre in Wales since 2009, when it was borrowed to join fellow Cardiff tramcar 131 at the Crich 50th anniversary celebrations. Since then it has been a static exhibit in the Exhibition Hall; however, recent comment suggests that this may not continue for much longer.

Earlier this year, it is stated that the TMS agreed to extend the loan period of Cardiff 21 by a further twelve months (it is not known how long the original loan was supposed to last for, or whether it had been extended before). The main reason for extending its stay at Crich was apparently to maintain the presence of a restored double-deck horse tram at the museum, ahead of the arrival of Leeds 107 following its restoration to running order by the Leeds Transport Historical Society. However, now that 107 has arrived at Crich, this may well cast a question mark over 21 and its long-term future. Although they may appear similar at a glance, many differences do exist between the two horse cars and therefore there would certainly be justification for keeping them both at the museum. However, space at Crich is very tight and with an unrestored Eades horse tram body pencilled in for moving from Clay Cross for display in the Exhibition Hall, the space currently occupied by Cardiff 21 may well be needed for other exhibits.

Whatever may happen to 21 in the future, it is hoped that this beautiful little tram will remain on public display and that it will not be returned to storage, as was the case before its move to Derbyshire in May 2009. 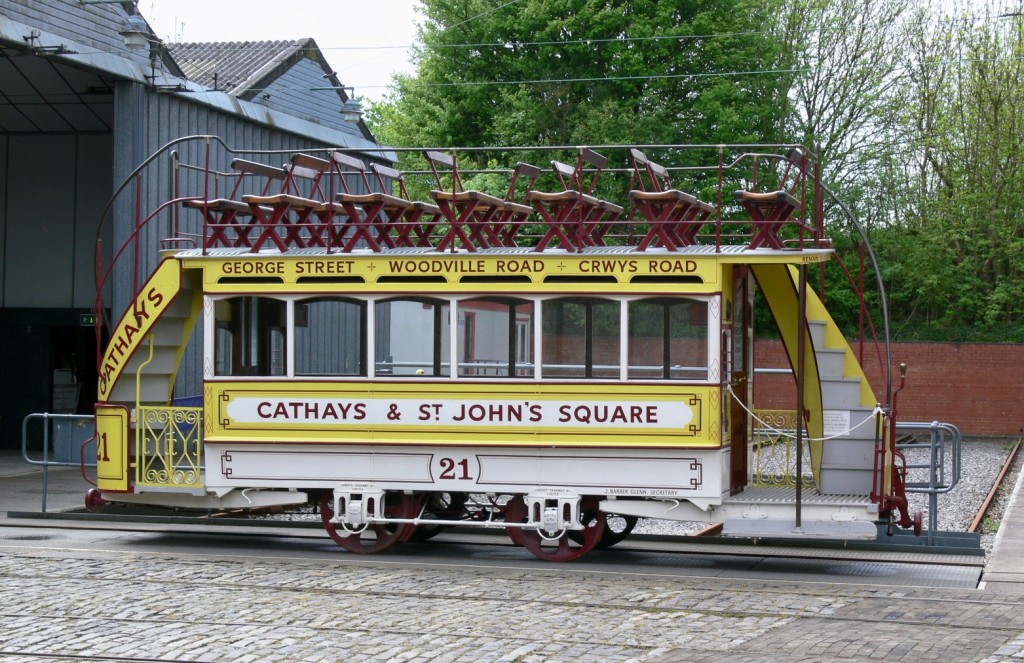 Although normally housed within the Crich Exhibition Hall, Cardiff 21 has occasionally emerged for special occasions whilst at the museum, and is pictured here on the traverser during the 'Crich 50' celebrations held in 2009. (Photo by Tony Waddington)

3 Responses to What does the future hold for Cardiff 21?