Posted on Thursday 3 October 2013 by Gareth Prior

It’s been a while since we had our incredibly irregular feature “Lost Trams” but it is back with a vengeance today as we take a look at a tram which left the UK way back in 1958 – Liverpool “Baby Grand” 293. Sadly like the last tram which we featured in this series this vehicle is now looking very sorry for itself languishing in one of the depots at the Seashore Trolley Museum in Kennebunkport, Marine.

Built in 1939, 293 was one of 100 “Baby Grands” constructed for Liverpool Corporation Tramways and survived right up to the very end of operations. In fact not only did it
survive until the final day it was the very final tram to run on the Corporation’s tracks as part of the final procession on 14th September 1957. To mark the occasion of the final procession the tram had been painted in a special “Last Tram” livery, mainly cream with green lining and lettering.

With no opportunities forthcoming to preserve the car in the UK the Seashore Trolley Museum in the USA acquired it in 1958 and it was transported to its new home on board the S.S. American Packer during that year. The tram was officially presented to Seashore by British Consul General Robert H.K. Marrett at Kennebunkport’s 1958 Memorial Day Parade.

Never having operated at Seashore, 293 remains stored in one of their “car barns” where its condition continues to deteriorate as time goes on with the last tram livery now in a very sorry state. 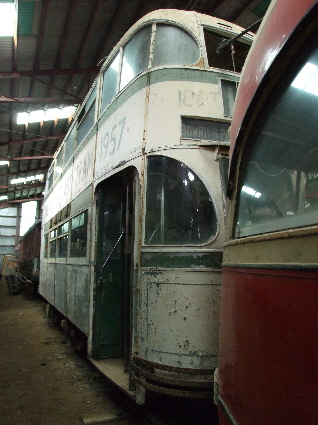 Photography of the UK trams at Seashore is not easy as they are positioned in the middle of the car barns. However the current condition of 293 can easily be seen in this view taken on 14th September. (Photo: Stephen Cobb)