Just when we thought the fuss around the controversial sale of Blackpool Boat car 233/605 to America by the Lancastrian Transport Trust was finally beginning to die down, the story of its departure has now been reported in the wider media. The Blackpool Gazette reported on its sale for the first time on 1st October, a whole month after the tram last ran in the UK, and British Telecom also published an article about 233 on their website the same day.

Despite being rather late in announcing this ‘news’, both websites carried similar details to a previous LTT press release, including the dubious claim that another preserved tramcar will benefit from the money raised by the sale of the Boat car. Statements were also included from both LTT Trustee Eric Berry and Blackpool Transport’s Bryan Lindop, despite the latter having no direct involvement in this deal.

Unfortunately, the Gazette website’s article was accompanied by an uncredited photograph of 233 taken by your writer! The photo, which showed the tram in service at Blackpool back in 2008, was actually supplied to the newspaper as part of a press release when British Trams Online sponsored its repaint as part of the arrangement which saw the car loaned to Beamish Museum in 2012. As neither the photographer or this website were credited, a complaint was made to the Gazette regarding its sudden unexpected appearance, and the story has since disappeared from their website. This is probably a good thing for Blackpool Transport, as the company was attracting a great deal of undeserved criticism from uninformed people using the comments box provided below the article itself. Commentators were accusing the LTT of being forced to take the drastic action of selling the tram to pay for the rent charges incurred whilst LTT trams were stored at Rigby Road (an arrangement which ended more than a year ago), and even suggested that Blackpool Transport did not deserve its remaining Boat trams as they rarely operate. Of course, such ill-informed rubbish completely ignores the fact that these vehicles are now designated tour cars which cannot operate in normal passenger service on what is now essentially a modern light rail system. It is a great shame that such negativity found a place on a high-profile website, yet the many positive developments involving Blackpool’s heritage tram fleet this year have been largely ignored by the local press.

Thankfully, Rachel Moloney’s piece on the BT website has not attracted such sensationalist replies, at least at the time of writing, and also contains a more recent – and appropriately credited – image of 233 in service at Beamish.

Incidentally, since the Boat left Beamish on 19th September, nothing has been heard of its progress and it is not clear whether or not it has yet reached its intended destination in San Francisco. However, it has been confirmed that the tram will not be commissioned for use as soon as it arrives, and that it will instead receive some modifications to make it suitable for carrying wheelchairs first, as was rumoured some time ago. Although it will be good for less able-bodied people to be able to ride on this wonderful tram, it further goes against the LTT’s original aim of preserving Blackpool trams to ensure that they would remain unmodified. It may be recalled that the Trust was quite critical of BTS a few years ago for the drastic modifications undertaken on some of the retained Balloon cars; words that may well come back to haunt them a few years on.

If anyone has any further information regarding 233‘s current whereabouts, please get in touch with us as we are keen to hear of its recent progress. 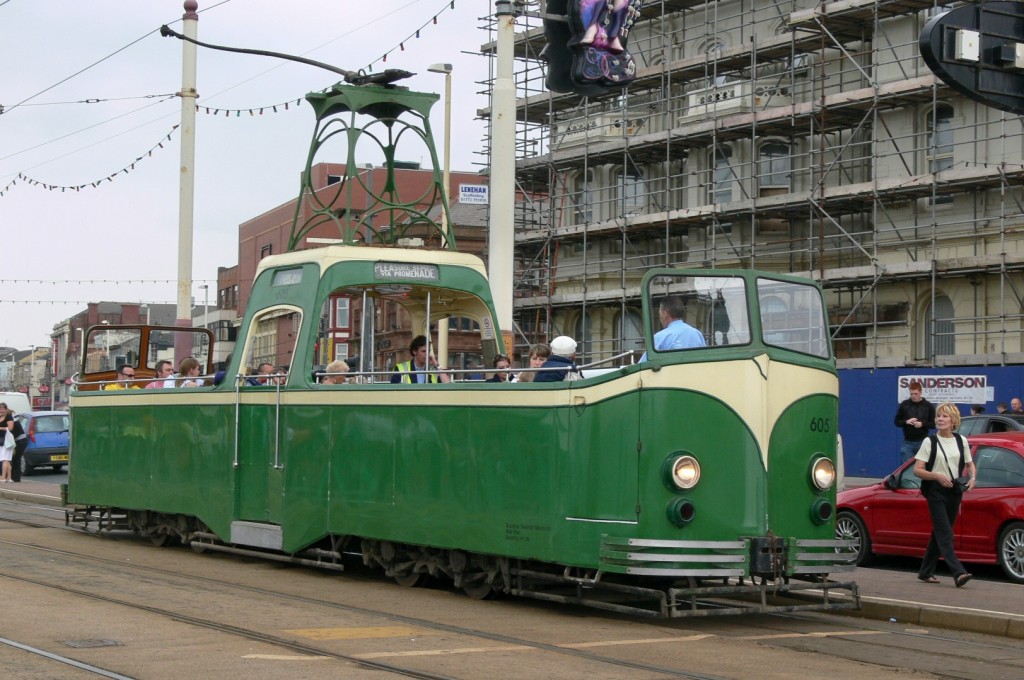 A rather familiar image of Blackpool 233/605 from August 2008, as briefly seen on the Blackpool Gazette website. The tram is seen in its 'wartime' style livery at North Pier. (Photo by Andrew Waddington)