The next piece of the Manchester Metrolink jigsaw has moved a step further forward with the start of daytime testing on the East Manchester line to Ashton-under-Lyne, which is  still scheduled to open in winter 2013/4.

The first daytime tests were on Wednesday 28th August and utilised M5000s 3058 and 3059. They initially ran between Clayton and Ashton-under-Lyne but were then confined to the section between Ashton Moss and the new terminus at Ashton-under-Lyne.

This extension of the East Manchester line will feature four new stops at Audenshaw, Ashton Moss, Ashton West and Ashton-under-Lyne and will see trams running through from Bury (although this will change to Eccles during works at Victoria early next year). Initial frequency will be every 12 minutes at peak times dropping to every 15 minutes off-peak. It is eventually planned that there will be a tram every 6 minutes on this line (12 minutes off-peak). It is still the plan that passengers will be carried from winter 2013/4 although no exact date has yet been given.

* A Photo Gallery of images from this daytime testing is planned to feature on British Trams Online soon. I’d like to say it will definitely be uploaded this weekend but there is yet another backlog of things to be added so I can’t guarantee it! 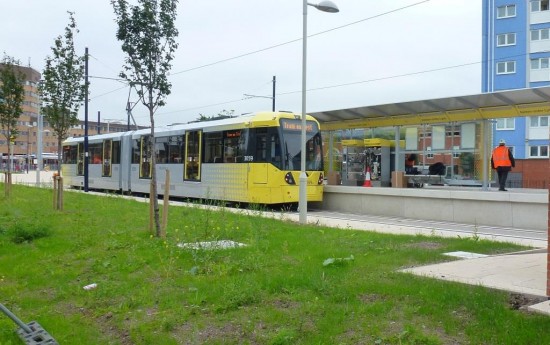 M5000 3059 sits at the Ashton-under-Lyne terminus during the first daytime tests of the East Manchester line between Droylsden and Ashton on 28th August. (Photo: Steve Hyde)