Members of the Crich workshop team, along with a Museum Curator, recently paid a visit to Blackpool to examine the 1914-built Blackpool & Fleetwood 40, which has been on long-term loan to Blackpool Transport from the national collection since 1996. The team were keen to assess the current condition of the tram generally known as ‘Box’ 40, so that a detailed report can be compiled on the car.

The Tramway Museum Society aim to maintain a ‘Condition Survey’ for each of the trams they own. This means that the condition of the vehicle is monitored and the findings are recorded for future reference. The results may be used to determine what, if any, work is required to keep a tram in an operational condition and to ensure that its historic value is protected. Despite effectively being the responsibility of Blackpool Transport, the TMS decided to produce an updated report on car 40‘s condition, hence the recent visit to inspect it. The Curator has been working with members of the workshop crew to discus the content of these surveys and tagged along to look at Box 40.

Hopefully the outcome of this study will be a positive one, and 40 will continue to operate well in Blackpool for the foreseeable future. Although it is highly unlikely that its condition will have improved after seventeen years with a coastal public transport system, there is no doubting that Blackpool Transport look after their heritage fleet extremely well, and so any recommended work on Box 40 will presumably be minor. Notably, the tram will celebrate its centenary year in 2014, and if rumours are to be believed then it could be in for a particularly busy year, which may well explain the timing of this examination by its owners. 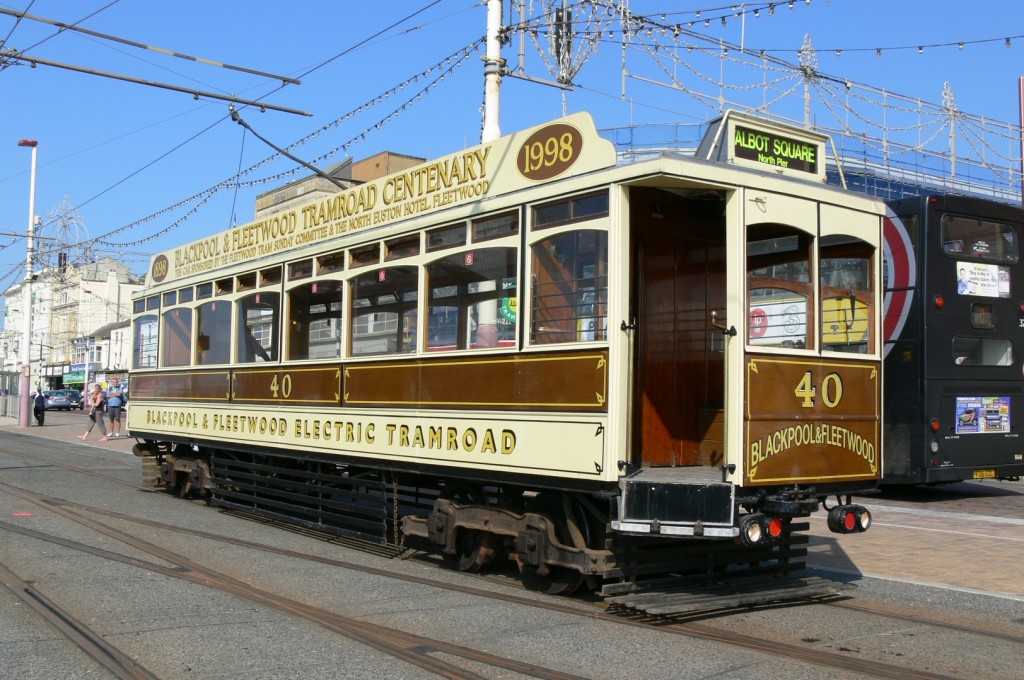 Fleetwood 'Box' 40 seen at North Pier on its most recent outing on Blackpool's heritage tram service, on 26th August. (Photo by Andrew Waddington)