Following a busy weekend, Leeds 107 departed its temporary home at the Middleton Railway on Tuesday 27th August, arriving at its new home later the same day. The superbly restored horse tram has now arrived at Crich Tramway Village where it is expected to become part of the national collection, giving Crich a fully operational double-deck horse tram for the first time ever.

Despite the tragic accident which occurred during 107‘s second day of service at Middleton, this did not prevent the plan to transfer 107 to Crich the following day from going ahead. As is usual with all tram moves to and from Crich, Scott’s Heavy Haulage were contracted to transport the car to its new home, with it arriving in Derbyshire during the afternoon, after an uneventful road journey. The car was unloaded in the depot yard and then deposited in front of the depot complex, giving onlookers the chance to admire this beautiful tramcar in unfamiliar surroundings.

One photo opportunity that many of us have been looking forward to, was the sight of Leeds 107 and Leeds 399 together – as both trams are painted in matching liveries of primrose and chocolate. The opportunity to do this on 107‘s first day at Crich was clearly too much to resist and 399 was briefly posed on the depot fan alongside the diminutive horse car, allowing two trams in the early Leeds colours to be seen together outside their native city for the very first time. Hopefully this will be repeated at the annual Crich Enthusiast’s Day on September 14th, and indeed, perhaps the chance could be taken to display 107 alongside some of the museum’s other Leeds cars?

Disappointingly there are no plans to operate 107 again this year, but hopefully it will join the operating fleet at Crich next season, and should then provide many years of enjoyment, justifying the considerable efforts made to return this tram to a pristine condition. 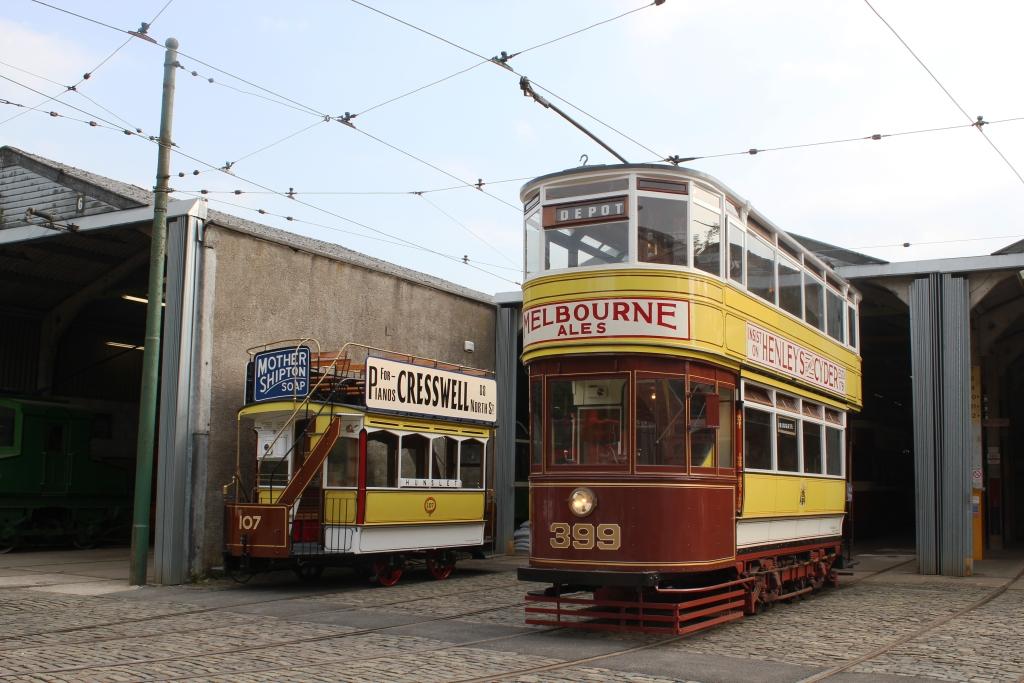 Leeds 107 and Leeds 399 make a fantastic sight outside the depots at Crich shortly after the horse tram had been unloaded, on 27th August. (Photo courtesy of Crich Tramway Village)

5 Responses to Leeds 107 moves to Crich