The fourth and final Bank Holiday weekend of 2013 takes place over the weekend of 24th to 26th August, and will naturally see the return of Blackpool’s heritage trams to their rightful place on the promenade. This weekend will, as expected, see the eagerly awaited return to use of Open Boat 602, as well as a whole host of other treats – and following the success of the static appearance of Centenary car 648 on Hopton Road for a previous heritage tram event, further photo opportunities are planned, featuring a number of non-operational cars!

Naturally, all of the details of the weekend – being dubbed the ‘August Bank Holiday Extramaganza’ – are subject to change depending on vehicle availability and the Great British weather. However, what follows is a rough idea of the current plan for all three days.

Saturday 24th August is billed as a ‘Centenary Serenade’, with Centenary car 648 making its first normal appearance on the heritage tram service following its restoration to near-original external condition. There will also be another chance to see and ride on sister car 642 after this tram failed to complete a full day in service on its previous appearance, and this should therefore be the first occasion that two Centenary cars have operated simultaneously since November 2011. After this event, 642 is to be withdrawn from use although the possibility of it returning in a new guise at some point in the future has not been ruled out! However, possibly the highlight of the Saturday should be the display of OMO 8 on Blundell Street, giving many people their first opportunity to view this popular tram since its return to the tramway in June, and reminding us all of the original driver-only operated Blackpool trams. It is also intended to use Brush car 631 for its first full day of service since completion of its recent makeover, with the fourth car likely to be one of Box 40, Standard 147 or Boat 600, presumably depending on the weather.

Sunday 25th August will hopefully be all about the open toppers with a trio of Boats – 230, 600 and 602 – due to be used along with ‘Princess Alice’ 706 for a ‘Boating Bonanza’! This day should also witness the launch of car 602 in 1920s style cream and red livery. Meanwhile, the afternoon photo opportunity should see Coronation cars 304 and 660 both displayed together – another superb sight not witnessed since 2010.

The final day of the long weekend, Monday 26th August is expected to be handed over to the older members of the fleet with Box 40, Bolton 66 and Standard 147 rostered for use alongside Boat car 602. However, there will be some changeovers during the day as some of these trams are replaced by their newer cousins, giving Centenary car 648 another chance to enjoy the limelight, whilst Twin set 272+T2 is provisionally scheduled to make the final journey to Fleetwood. There will also be a rare chance to see a second Twin car in Blackpool that day, as 675+685 will hopefully be extracted from the confines of Rigby Road depot and displayed alongside the Fitting Shop wall.

The operating pattern on all three days will be the familiar one with all trams running as directed, except for a trio of trips to Fleetwood in the morning, afternoon and early evening. The first Fleetwood car will depart from North Pier at 10:36am, with others leaving Pleasure Beach at 1:59pm and 5:25pm. The static tram displays at Rigby Road should be available during the afternoon, between approximately 1:00pm and 3:00pm.

It should be stressed that the above information is all very much subject to change. If, for example the weather forecast is looking negative for Sunday, one possibility is that the themes of the days may be swapped around to give 602 the best chance of fine weather for its launch event. Whatever happens though, this looks certain to be a fantastic finale for the daytime heritage tours and will hopefully be very well supported by enthusiasts and the general public alike.

Our extreme gratitude goes to Bryan Lindop of Blackpool Transport Services, for providing all of the information described above. 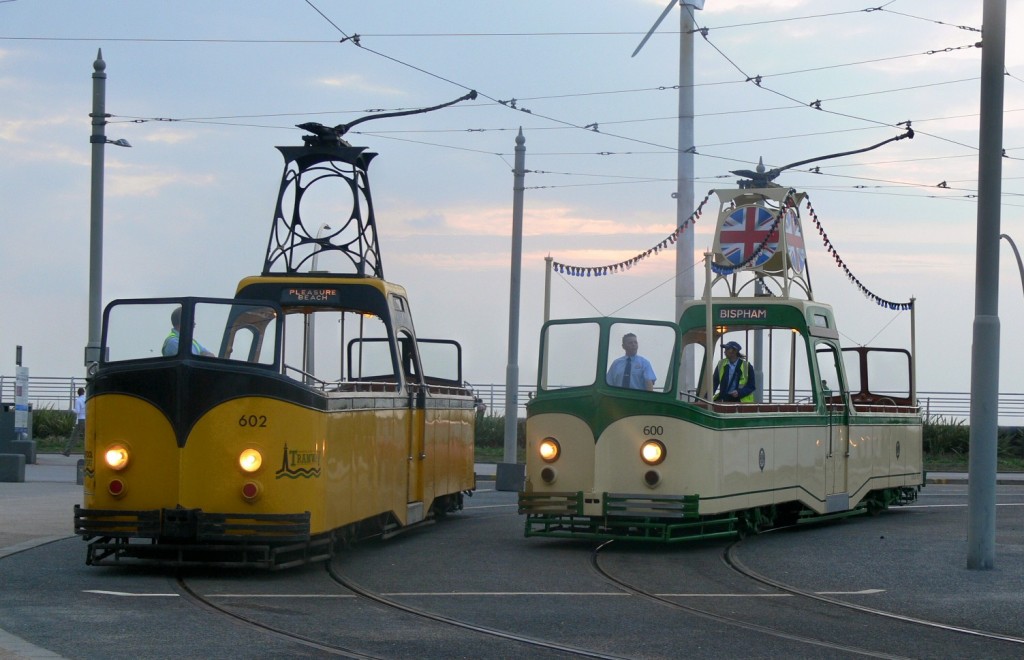 A classic scene from 2008 with Boat cars 600 and 602 together at Pleasure Beach. Soon both trams will be operating together once more, although neither will look quite the same as 602 will have been repainted and 600 was of course fully refurbished in 2010. (Photo by Andrew Waddington)