In all the excitement surrounding the new trains for the Tyne & Wear Metro – mock-ups, simulators, construction process – it can easily be forgotten how things were back in the late 1970s when the system was in the final stages of being prepared for opening. This included a special test track built at North Shields and a cab mock-up used to tour local schools for safety talks. In this article we see those two featured today, now at the Stephenson Steam Railway.

The original test track was used for the two prototype Metrocars to put them through their paces before the network opened, and this included some public runs. The 1.5 mile test track was constructed in 1975 and remained in use until 1975. As well as the test track there was a small two road depot to house 4001 and 4002 and after the test track was lifted this remained in position. The site was subsequently developed to become the Stephenson Steam Railway with the Metro line crossing the operating line at the railway. 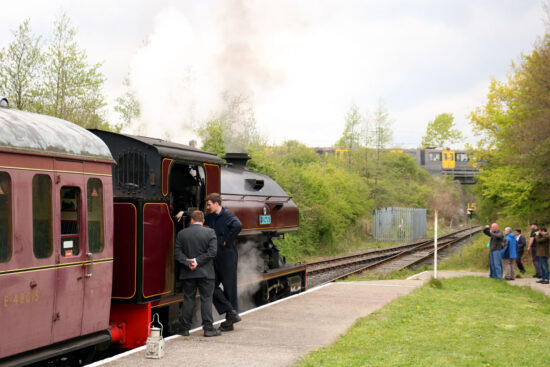 Over the May Day Bank Holiday the railway held their steam gala which included ex-South Wales Steel Co 0-6-0ST Victor visit from the Lakeside Railway in Cumbria (the railway is home to identical loco Vulcan). Victor is seen here just as train on the Metro passes overhead. 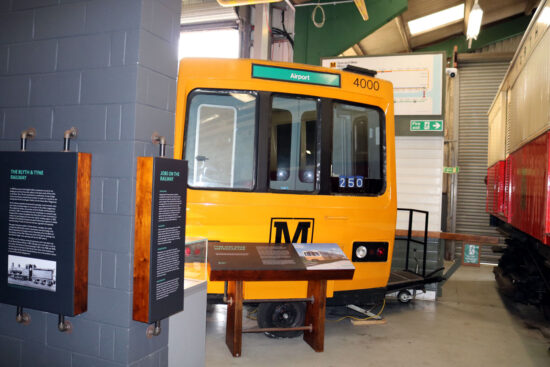 The mock-up cab – numbered 4000 – was built in around 1978 and was used to go round local schools as part of safety talks. Its now safely in the museum. (Both Photographs by Trevor Hall, 1st May 2022)