In Pictures: Progress at Newhaven

Posted on Tuesday 29 March 2022 by Gareth Prior

In this latest look at construction works on the Trams to Newhaven project in Edinburgh we head to the “to” bit of that title – the terminus at Newhaven itself. Located almost 3 miles (2.91 to be precise) from the former end of the line at York Place the Newhaven terminus will not only feature the stop but will also see staff welfare facilities and stabling space for trams provided.

It was recently announced as part of the updated construction programme that this section of line (from Melrose Drive to Newhaven) would finish in June 2022 – a slight delay from the original completion date here of Winter 2021/22. There have been additional complexities in the utility diversions and the major work involved in the realignment of Lindsay Road have contributed to this extra time needed. As with the rest of the route its said that this extra time will not affect the final completion date of Spring 2023.

Just before the terminus there will be this double crossover (the terminus is just behind the photographer). This view looks roughly east – the track descends the ramp onto Ocean Drive and then proceeds in front of the Ocean Terminal multi storey car park to turn left into the Ocean Terminal tram stop. The low red brick and glass building is the former Britannia visitor centre (now Forth Ports Cruise Liner Terminal plus some offices). Ocean Terminal is behind while unfortunately the shed roof centre left obscures Britannia although you might just be able to make out some of the flags from its masts. The crossover is where the tramway reaches the level of Lindsay Road. A new junction between Lindsay Road and Ocean Drive is being created. 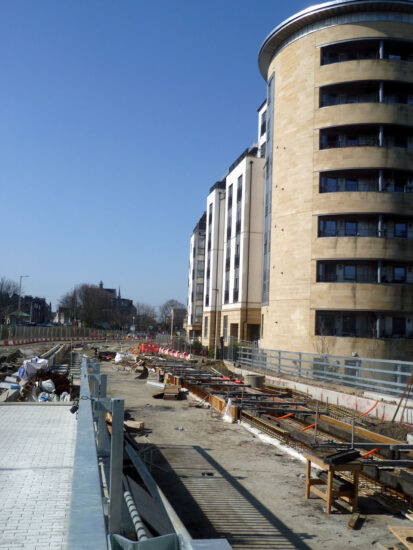 This view looks into the Newhaven terminus from the still closed north side of Lindsay Road. Part of the pavement is seen on the left with the airport bound track being laid. Inbound track is still to be laid in the foreground. You can just make out in the distance the sides of platforms. Beyond that will be the stabling area and staff welfare facility. Lindsay Road follows the fence line in the direction of Newhaven harbour. The waters of the Firth of Forth once lapped right up to the site of the flats on the right until the 1930s. (Both Photographs by Roy Calderwood, 27th March 2022)