In this latest instalment of “Trams &” we are off to South London as we take a look at a tram running on the Tramlink system along with the distinctive sight of a red London bus.

This image is taken on Addiscombe Road in Croydon where the trams share the road with other road traffic before they go segregated again at Sandilands. There is one intermediate stop along Addiscombe Road, that at Lebanon Road which has staggered platforms either side of the road. We are at Lebanon Road on 21st September 2021 for this photo where Variobahn 2559 is just calling at the stop with a service from Wimbledon to Beckenham Junction.

Alongside the tram is a Wright Gemini 2 bus which is being operated by Arriva. With the registration number of LJ62 BBZ and the fleet number DW 506 the bus is just pulling out of the bus stop as it works a no. 466 bus which is heading to Catherham-on-the-Hill. 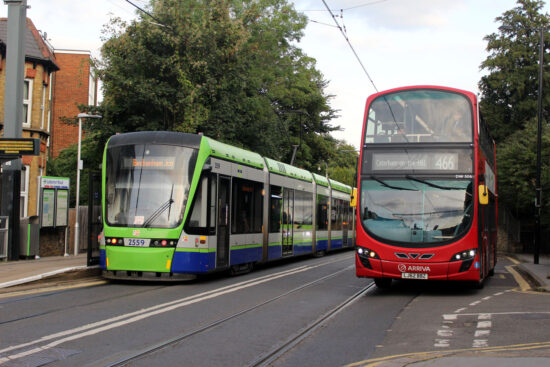