Posted on Sunday 23 January 2022 by Gareth Prior

It looks as if it just as well that tram services haven’t resumed beyond Bull Street in Birmingham City Centre as over the past week there has been further work taking place around the tram tracks. This has included work on Corporation Street and close to Grand Central with tactile strips being installed adjacent to the official crossings (which will in all likelihood have no impact at all in people just walking where the want!).

The tracks are blocked on Corporation Street as work takes place by the side of the line.

A view from the other side of the temporary worksite on Corporation Street.

Lots of lots of barriers at the junction of Corporation Street and Bull Street and it appears a workman whose job it is to sit on a chair at the entrance to the worksite! (Photographs x3 by Andy Walters, 18th January 2022) 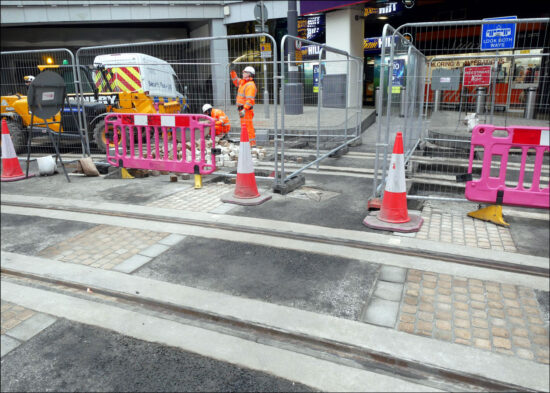 A few days later and work was taking place on the official crossings down at Grand Central. The new tactile strips either side of the crossing can be seen here with this being on the curve from Corporation Street to Stephenson Street on the approach to Grand Central. (Photograph by Roland Bull, 21st January 2022)