Posted on Friday 21 January 2022 by Gareth Prior

In this edition of “Picture in Time” we are featuring a single decker and a double decker tram operating on the Blackpool Tramway during September 2010.

The photo featured below was taken at Bispham on 28th September 2010 and shows two trams heading in opposite directions although if the destination blind is anything to go by one of them will be soon be going back from whence it came!

On the southbound track (the right hand side) is Balloon 719 which is just arriving at the stop (with its simple shelter) with a service which will head as far south as it could at the time – Pleasure Beach. This tram remains in Blackpool today and received the “B” fleet modifications to allow it to be used with the LRT platforms although in truth has seen very little use for this purpose with it regularly having been loaned to the heritage fleet. At this time it was in an advert for Pleasure Beach (which it would keep until the end of the traditional tramway in November 2011). Meanwhile, the left hand side is dominated by Centenary 645 in another of the plain liveries left after the removal of advertising vinyls (in this adverts for Jet 2 had gone in November 2009. 645 has not run since the end of the traditional tramway in November 2011 (indeed it failed on the last day) and has had a bit of a yo-yo existence since, being sold to Windy Harbour Caravan Park, returning to Rigby Road before then becoming part of the Fylde Transport Trust collection although at the time of writing is still stored at the tram depot. You can also just see Sheffield 513 on the centre track behind these two. 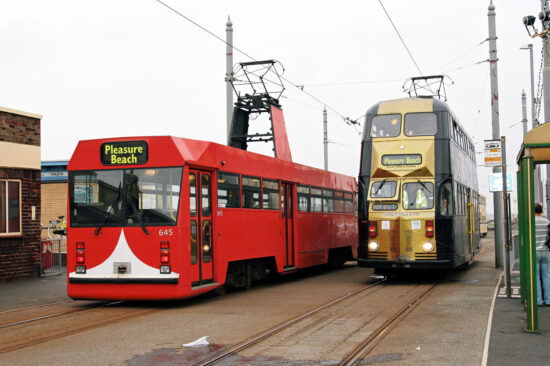