Posted on Tuesday 11 January 2022 by Gareth Prior

Whilst 2021 was once again anything but a normal year for the Beamish Tramway (or let’s be honest the world!), the trams did run for around a quarter of the year (starting from the beginning of September through until the end of the year) and still managed to clock up the mileage during that period. For the second year running the figures showed that Sheffield 264 was the hardest working tram accounting for almost 50% of the nearly 4,000 miles covered by the fleet at the museum.

As we reported throughout the latter period of 2021 the tramway resumed operation on 4th September but was unable to run around the complete circuit because of required maintenance on the section past the Events Field between Foulbridge and the Town. Initially running from Foulbridge to the east end of the Town (via the Entrance and Pockerley) this route was extended into the Town a few weeks later. Most days saw one tram in service but at times there was a two tram operation.

Its probably not that surprising that 264 tops the charts as the bulk of the warmer summer months when Blackpool 31 would have come into its own to regain its crown as the highest mileage car saw no tram service and the Sheffield tram does still have the open balconies to provide some outside accommodation for those brave enough to experience the elements!

In total five passenger trams ran in service with Newcastle 114 being commissioned towards the end of the season and Oporto 196 mainly used on driver training. Looking ahead into 2022 and 196 will be withdrawn from service this winter requiring an overhaul leaving the four double-deckers to carry the load until 2023 when Gateshead 10 is due to return to action – and 2023 will also see the 50th anniversary of the tramway.

2021 Beamish tram mileages (with 2020 figures in brackets for comparison): 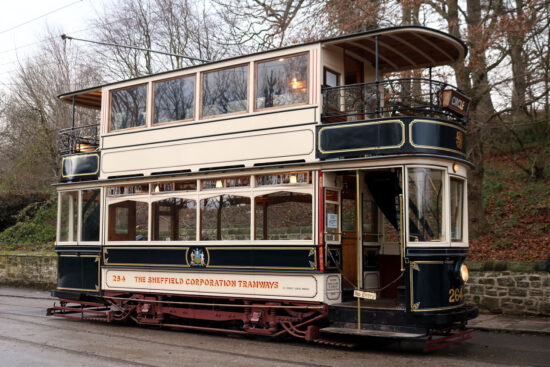 Top of the charts for mileage in 2021 was Sheffield 264, for the second year in a row. The tram has already entered service for 2022 and is seen here at the stop for Home Farm (Foulbridge/Pit Village). (Photograph by Trevor Hall, 9th January 2022)