Our Blackpool edition of “Picture in Time” is this week featuring an image taken during 2010 and showing the very first of the Centenary Cars.

Towards the end of the traditional Blackpool Tramway as advertising contracts expired and the vinyls were removed a number of trams ended up operating in plain base liveries, partly waiting for a new advert and also presumably to reduce costs any repaint may endure. One such tram which ran in a plain livery was Centenary 641 – although with a twist! With the base colour of the tram’s last advert being orange (from an Orion Bingo advert from 2005/6) and with the town’s football team playing in orange (officially tangerine) the chance was taken to add a little bit of signwriting to the advert boards: “BLACKPOOL TRANSPORT SUPPORTING BLACKPOOL FC….GLAD ALL OVER” along with the football club badge either side. Large Blackpool Transport logos were also added to bodyside. 641 would truly become the Blackpool FC tram following withdrawal though when it received a commemorative livery when it was first display alongside Pleasure Beach loop under the ownership of the Fleetwood Heritage Leisure Trust.

In this photo on 28th September 2010 we see 641 just leaving Pleasure Beach loop with its destination blinds set for a journey north to Thornton Gate. 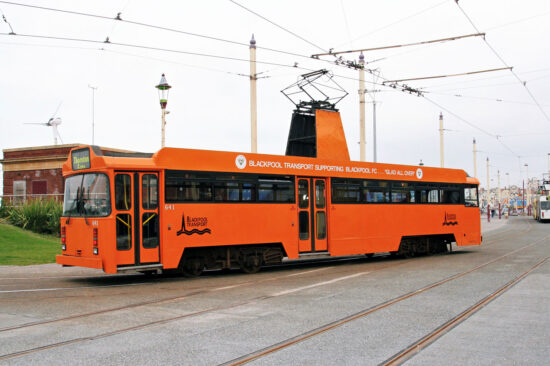