Posted on Monday 6 December 2021 by Gareth Prior

Our third returning photo series for December is “They Ran in 2021” (granted this exact series hasn’t run before but its the same premise as “They Ran in 2020”, just that the year has changed!). Over the next month we will take a look at some of the heritage trams across the British Isles which have run over the past year. Its by no means a complete list (and isn’t intended to be) of everything which has run but allows us to celebrate a few of those trams (and if they feature in “15 Years Apart” they don’t feature in this series). We kick it off by heading to Beamish.

The first tram we feature is Sunderland 16 which saw its first use for 2021 on 12th September. With the Beamish Tramway not starting to run again until 4th September the trams had a longer hiatus than in other places and with 16 requiring some additional attention before it could run it had a bit longer to wait. Its use on 12th September was the first time that it had been used since at least March 2020. With its fully enclosed design Sunderland 16 has gone on to be a popular all weather car at Beamish on the truncated tramways currently in use. 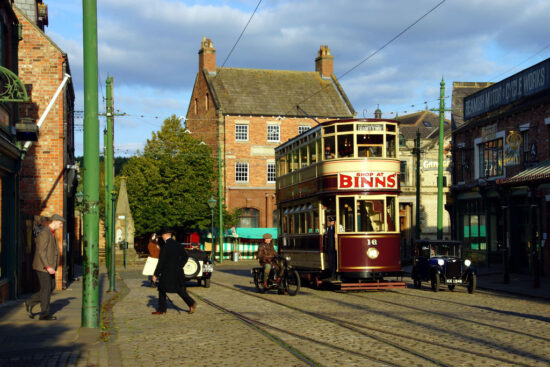 We see Sunderland 16 in the Town during a Photo Charter on 17th September 2021. (Photograph by David Mee)