Posted on Sunday 28 November 2021 by Gareth Prior

“Stop by Stop” carries on our journey on Nottingham Express Transit today and we take a look at the Royal Centre stop.

When we leave the Old Market Square stop its another tight curve as we start to climb away and enter Market Street where we share the road once more. There are traffic lights which may interrupt our journey before we cross over Upper Parliament Street and then arrive at Royal Centre. Unsurprisingly this stop is located alongside the Royal Centre which includes the 1865 built Theatre Royal and the more modern (1982) Royal Concert Hall. We’re back to one shelter on each platform here with ticket machines, passenger information displays, information panels and validators also featuring. 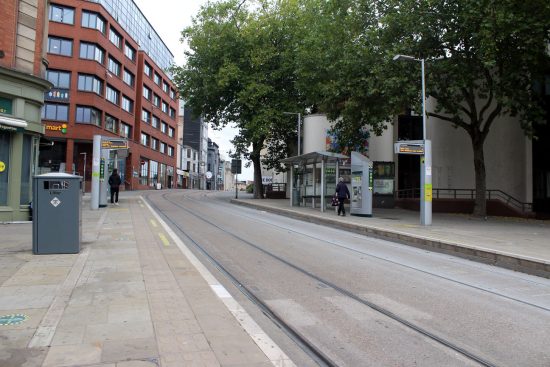 When we say its alongside the Royal Centre we mean it! The white building on the right is the centre and you can, at times, hear the trams trundling past when inside the theatre. This is the stop looking out of the city. 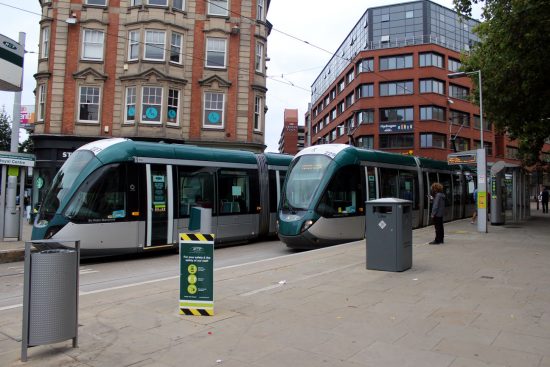 Its not the easiest of stops to take photos of – especially from the city end – with it being almost immediately after the road crossing. This view is looking out of the city and shows 229 with a service to Toton Lane nearest to the camera and 227 heading off to Phoenix Park on the far side. 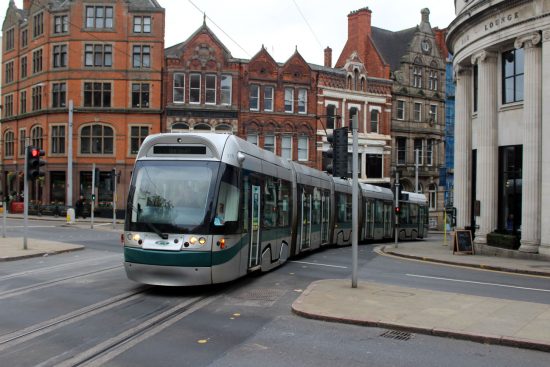 215 is just crossing Upper Parliament Street and arrives at Royal Centre with a service to Hucknall. (All Photographs by Gareth Prior, 20th September 2020)