Posted on Monday 29 November 2021 by Gareth Prior

In this edition of “Trams &” we are off to the East Midlands as we feature a image at one of Nottingham Express Transit’s termini with a tram joined by another bus.

This photo was taken on 19th September 2021, a rather grey Sunday, at Hucknall where if you are very lucky with your timings you could possibly get a bus, tram and train in the same photo! We weren’t quite that lucky in this shot but two out of three ain’t bad! The tram interest in this photo is provided by 216 – the first of the 21 strong class of Alstom Citadis trams built for NET in Barcelona from 2013-4, it arriving in the East Midlands a little over eight years before this photo (10th September 2013). The tram will soon be departing for Toton Lane.

It is joined in this photo by a rail replacement bus which is running a service on behalf of East Midlands Railway to Mansfield Woodhouse calling at all stations on the way. The Volvo bodied bus – registration number 7842 KR – is operated by Millennium Travel, a firm based in Mansfield. 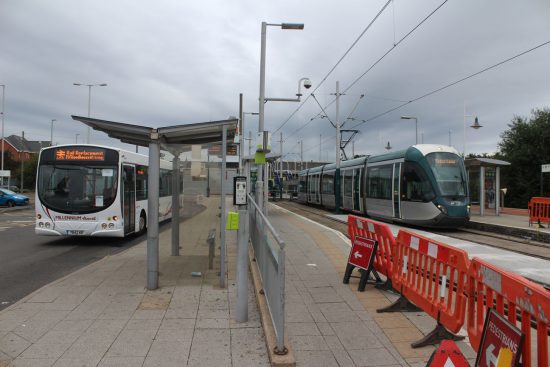