We remain in South Yorkshire for this latest edition of “Picture in Time” with a view taken on Supertram during 2003.

This time we find ourselves at the Fitzalan Square/Ponds Forge stop looking away from the city centre with 103 departing from the stop with a Purple route service to Meadowhall. It won’t be long before its back at this stop – albeit on the opposite track – as it will go two further stops to Cathedral where it will reverse and then head off to Meadowhall.

103 is in the second Stagecoach livery, including the dark blue band at the bottom, and we can also just make out a second tram on the Park Square Bridge. The views beyond the tram also show the housing here which has since seen a major refurbishment. 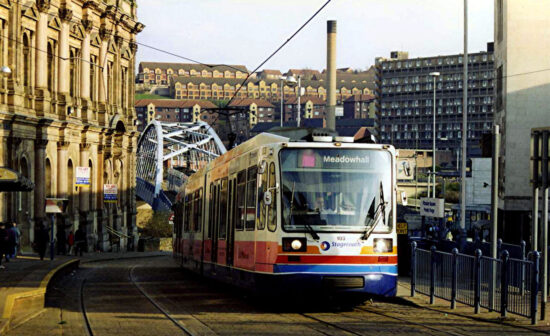