Posted on Thursday 21 January 2021 by Gareth Prior

It has become the most popular type of advert on a UK tram in recent years – the majority of the tram just gets ads above the windows with just one or two sections having full height adverts, allowing for the tram’s fleet livery to still be seen. One of the systems which has gone down this line for all their adverts so far has been Edinburgh Trams and in this article we take a closer look at some of those full heigh adverts.

The traditional style of advert on Edinburgh Trams has seen the third and fifth sections getting the full height adverts with the other five sections of the seven section tram having adverts above the windows. In general the full height ads have included contravision covering the wndows.

Pictured below are the two centre sections on 257 for its advert which was for the Ray Harryhausen Titan of Cinema exhibition being held at the National Galleries of Scotland in Edinburgh. This advert was applied during November 2020 and at the time of writing remains in place on the tram. 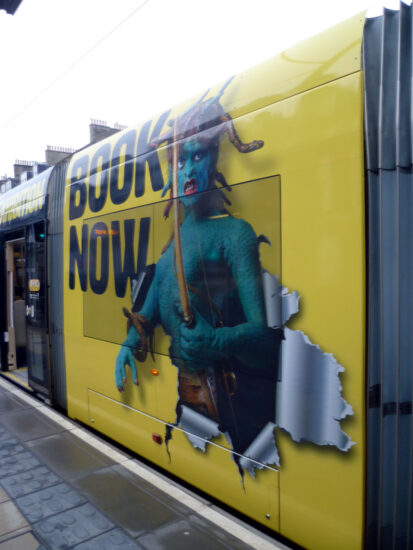 The two centre sections of the advert on 257 are seen here showcasing some of Ray Harryhausen’s work which features in the exhibition. (Both Photographs by Roy Calderwood, 19th January 2021)