Today our comparison series “15 Years Apart” is heading to the Fylde Coast again, although this time its not a Blackpool tram we feature but a long-standing guest!

In 2005 Bolton 66 had already been in Blackpool for 24 years having arrived at the first loan tram in 1981 after its extensive and high quality restoration. By the time this photo was taken on 10th September 2005 at North Pier the tram was a very familiar sight and was regularly pressed into action on both Promenade specials and illumination tours. As can be seen from this image to add to the spectacle it received illuminations on the ends, including one with sponsorship for ACDO and the other a star with the number 66 contained within. These illuminations are a historical addition as when the tram last ran in Bolton (March 1947) it was decorated with an illuminated star and the shield of Bolton and these were recreated by the Bolton 66 group as seen here (albeit with the Bolton coat of arms replaced by advertising). 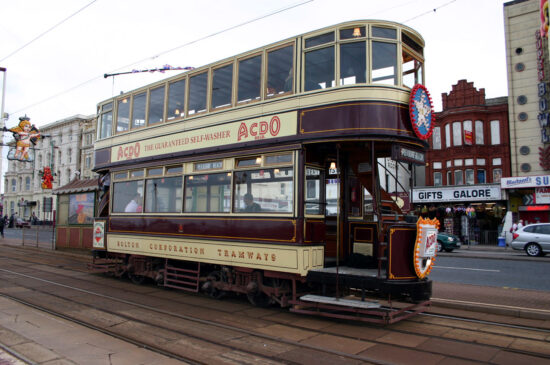 2020 and 66 has obviously now been in Blackpool for 39 years. Moved into the heritage fleet once the upgraded tramway opened it has enjoyed some workshop attention over the years and is now running sans adverts once more showing off its traditional tramway shape and Bolton Corporation Tramways maroon and cream livery wherever it goes. This image was taken on 26th September 2020 with the tram heading away from the camera at Cocker Square with a northbound heritage working on the occasion of the Blackpool Tramway’s 135th anniversary. 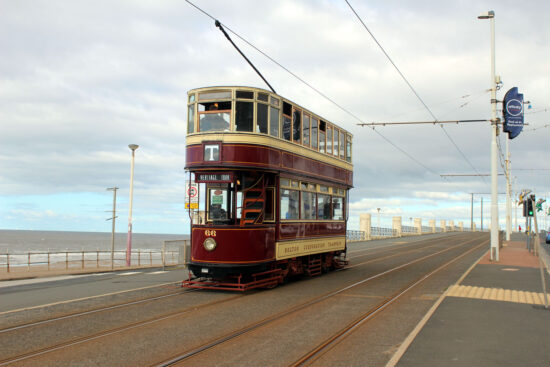