Posted on Wednesday 18 November 2020 by Gareth Prior

Today our series which looks at old first generation tramways structures which remain extant is again in London with the depot at Stamford Brook featured.

This building was originally known as Chiswick tram depot and was opened by the West Metropolitan Tramways Company in 1883/4. It was taken over firstly by London United Tramways Company on 19th July 1894 and then by London County Council on 12th October 1922. As would be expected by these dates it started off as a home for horse trams until 3rd April 1901 after which electric trams would move in and stay until 5th May 1932. It was used as a store for withdrawn trams until 1935, was then used for trolleybuses for a brief period and then as a bus works and store, probably as an outstation to Chiswick works.

By 1966 it was used as a garage for the airport coaches that London Transport ran and maintained for British European Airways, later British Airways. It became a bus garage in 1980 but was closed in 1996 before reopening in 1999. It is now operated by London United – RATP Dev. 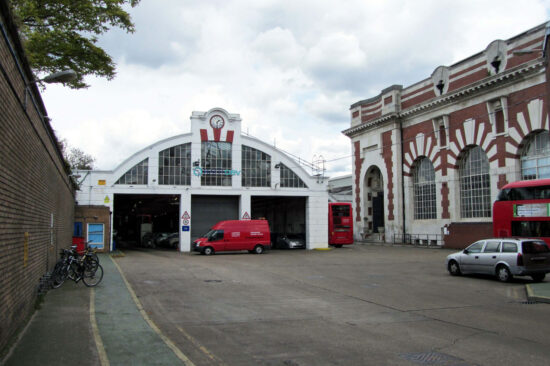 This view shows the depot building complete with clock on 30th April 2016. (Photograph by Bob Hodges)