Posted on Monday 9 November 2020 by Gareth Prior

We continue our look at some of Blackpool’s trams as they were in 2007 in this edition of “Picture in Time” as we feature a much more traditionally shaped 721.

Of the trams we have featured over the past few weeks, 721 is by far the most traditionally looked Balloon Car with it not being one of those selected for major rebuild but despite this it had still received a full advertising livery at this time with the Pleasure Beach being its sponsor for two of their shows taking place in 2007. Whilst this view only shows the Hot Ice side and end the other end and side advertised Forbidden. This advert was applied to the tram in the May of 2007 so by the time this photo was taken it was only a couple of months old and despite its white background remained pretty pristine. 721 would only last another couple of years in service with final withdrawal coming at the end of the 2009 season (by which time it had received another advert for the Pleasure Beach) and it was subsequently acquired by the North East Electrical Traction Trust and is stored with their trams at the North East Land Sea and Air Museum near Sunderland.

This photo shows 721 in the familiar surroundings of Bispham as it heads off to Starr Gate. 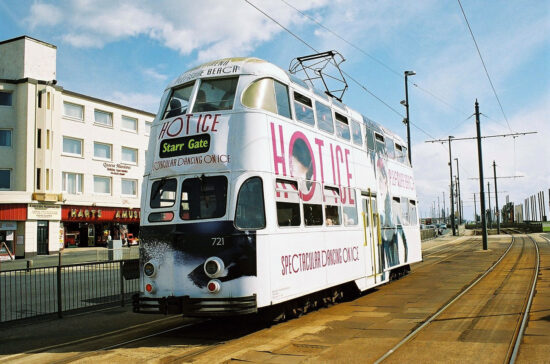