Posted on Tuesday 13 October 2020 by Gareth Prior

It’s a bit of a strange one for “Still Standing!” this week as we take a look at some tram track which remains in the road in Blackpool but is now disconnected from the remainder of the tramway with no overhead in situ. We are on Princess Street and Blundell Street in this edition.

The track seen in the below photos ended its operational life as the alternative access to Rigby Road Depot via Foxhall Square (with its last significant use over the winter/spring period in 2005 when the line via Lytham Road to the depot was being renewed) but since 2013 has been severed with the track across the Prom road tarmacked over and at the same time the overhead was removed. The only remaining section of overhead is further along Blundell Street towards the depot where it remains for shunting purposes along the wall of the Fitting Shop.

Its later history may be one of rare use and just waiting to see if it would be needed again but this alignment was once the original access to Blundell Street Depot and has been in place for well over 125 years. But with new developments on the former depot site – housing – making progress the track which does remain, particularly on Blundell Street itself, is likely to not be long for this world. 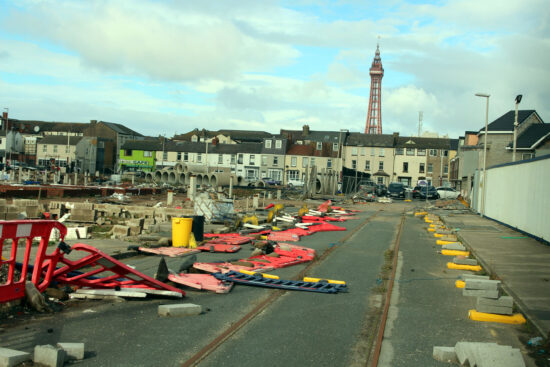 The view through the worksite on Blundell Street with the track remaining in the middle! The contractors who were building the new houses are no longer trading. 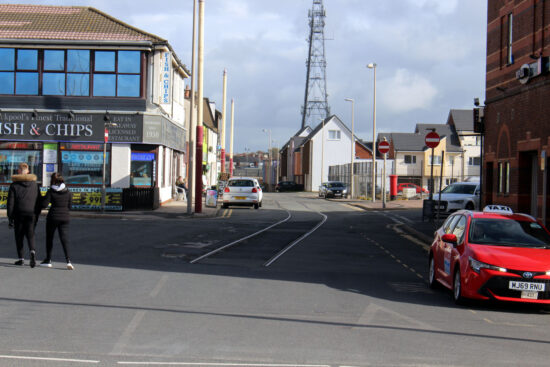 Looking from the Prom along Princess Street where the track just ends but the historic line beyond here remains intact – how long for is unknown. (Both Photographs by Tony Armitage, 10th October 2020)

This entry was posted in Blackpool Tramway, Still Standing!. Bookmark the permalink.