Posted on Monday 12 October 2020 by Gareth Prior

The next few weeks of our Blackpool themed “Picture in Time” series heads back to 2007 to take  a look at a few of the trams in service at that time with some well-loved and some less well-loved(!) liveries. We start off with Balloon 700.

If you mention Balloon 700 to many tram enthusiasts now you are likely to get a whistful look on their faces as they remember how it used to look before chosen to receive the door modifications for use on the upgraded tramway but these 2007 images will probably explain why! As the prototype of the Luxury Dreadnoughts, 700, (226 as initially numbered and then quickly 237) has always been a popular tram in the fleet and this popularity multiplied at the end of the 1990s when it was withdrawn for overhaul in 1997. Rather than a modern overhaul – as had been seen on other Balloons such as 723 around this time – it was decided to give a heritage type overhaul, which although would include modern features such as halogen headlights, saw items such as a trolley, twin destination indicators and dummy centre destination blinds included. To cap it all off it received a coat of Wartime Green and Cream making sure the tram turned heads wherever it went. By the time of these photos it may have received a pantograph in lieu of the trolley but it was still more or less as it had been when first revealed in the previous decade. Of course, since then it has got those widened centre entrances and a coat of Purple and White but it still does retain some of those heritage features.

In this first image we are on Fleetwood Esplanade where we see 700 standing at the old Fleetwood Ferry loading stop on 7th August 2007 ready for a full length journey to Starr Gate. 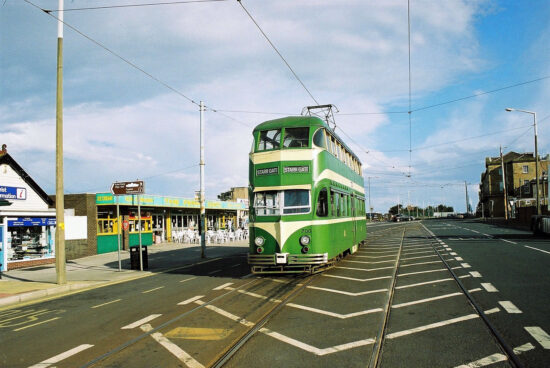 Then a little bit later we see 700 having started off on its journey as it turns from Pharos Street into North Albert Street with the conductor and his hi-vis jacket seen as he checks for fares. 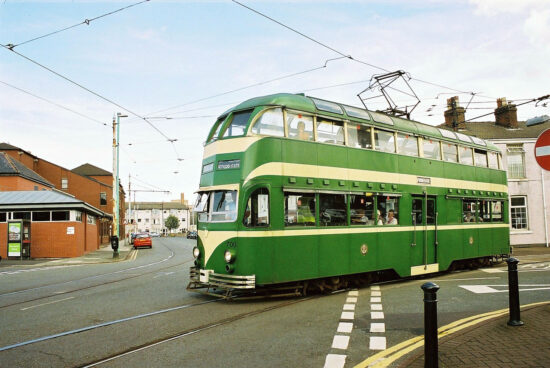