Posted on Sunday 11 October 2020 by Gareth Prior

As with so many heritage organisations, 2020 has been a challenging year for the Llandudno & Colwyn Bay Tramway Society with their usual fundraising channels having been removed as events around North Wales have been cancelled due to the Coronavirus pandemic. But despite this there has been one ray of sunshine – film crews from S4C have been to visit the tram for a future episode of Welsh language series “Cynefin”.

Replica tram no. 7 is to feature in an episode of “Cynefin” which will be covering the Colwyn Bay area. This series visits different areas of Wales and features some quirky and lesser known local stories – of which the tram is obviously going to be one of them.

It is not known yet when the episode featuring the tram will be broadcast but watch this space for more information!

The news that 7 is to feature on television is a much needed boost for the volunteers of the Society who have been unable to raise funds at events throughout the year, including their highest profile event the Llandudno Victory and Victoria weekend. It is hoped that there is an outside chance the tram may be an outing to the Llandudno Christmas Parade on Saturday 5th December 2020, although that is dependent on the event going ahead and is subject to local restrictions at the time.

With the lack of opportunity for fundraising the Llandudno & Colwyn Bay Tramway Society are always looking for any support possible. The easiest way to help is by becoming a member of the Society, costing just £10 per year you will receive 3 to 4 newsletters a year, the chance to get on board the tram at events as well as knowing you have helped to save the history of the Llandudno & Colwyn Bay Electric Railway. You can find more details on how to join at http://swissitalianpaddlesteamers.com/lcbtramsoc/membership.html. 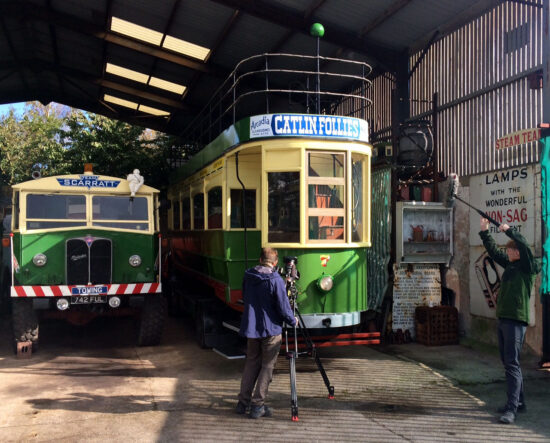 The S4C crew filming no. 7 alongside the faithful Matador lorry which usually provides the power to tow the tram around the local area. (Photograph by Andy Scarratt)