Posted on Wednesday 7 October 2020 by Gareth Prior

It is time to head back to Nottingham for one last time in this batch of modern tram “Picture in Time” images as we take a look at one of the early advertising liveries carried on the trams.

When Nottingham Express Transit opened in 2004 there was limited advertising carried on the trams but one tram which did receive a full vinyl wrap (except for the cab ends) was 213 with this striking design for Powergen featuring their advertising campaign and slogans of the time. We see 213 here on 10th March 2004 as it stops at Royal Centre with a service for Hucknall. This design would be relatively short-lived as the following year it would receive a darker blue design for the same company but by 2008 it was back to fleet livery. 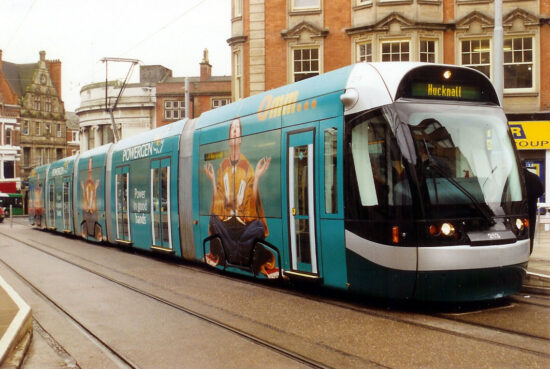