Posted on Monday 21 September 2020 by Gareth Prior

Today we take another look at a Metro Coastlines livery style carried on a Blackpool Tram in the early 2000s.

The below photo shows Twin Car 672+682 at Tower proudly showing off its Metro Coastlines Orange and Yellow livery, which was carried by the Line 1 Promenade buses. Five of the Twin Cars were to receive a repaint into Metro Coastlines livery in the early years of the 21st century after they underwent overhauls to enable them to be used on the Fleetwood service after the condition of the track to the northern terminus was deemed to be unsuitable for double-deckers to continue running. 672+682 entered service for the first time in these Metro Coastlines colours in time for the 2003 season and would retain these colours for the remainder of the traditional Blackpool Tramway, with it operating on that last weekend in November 2011. 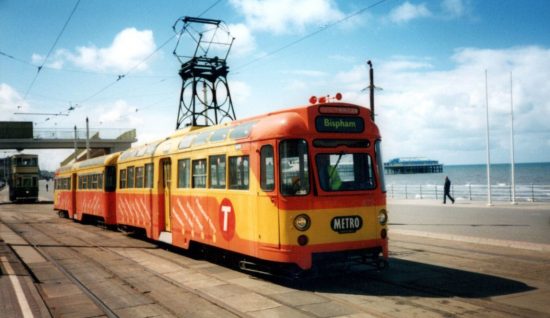