In Pictures: Archaeology work on Trams to Newhaven project

Posted on Sunday 30 August 2020 by Gareth Prior

When new tram lines are constructed we are used to the initial stages of utility diversion works before much obvious progress can be seen but an extra stage of works on the Trams to Newhaven project in Edinburgh has seen archaeologists on site to investigate just what lies beneath the road surface in this historic area.

GUARD Archaeology have been contracted to undertake the work and they have recently been concentrating their efforts outside South Leith Parish Church. Previous investigations had shown that in the medieval period the church’s graveyard extended under the modern road and that graves still survived under the surface. Any human remains which are likely to be affected by the tram works will be removed and so far more than ten bodies have been exhumed. These bodies are thought to date from between 1300 and 1650.

These remains will then be subject to detailed examination and analysis by GUARD Osteoarchaeologists which will help to reveal information on the health, diseases and diet of the people of medieval Leith.

Bob Will from GUARD said: “The construction works to bring the Edinburgh tram to Newhaven has offered an opportunity to shed some light on centuries of history here in Leith. It’s crucial that we excavate the human remains found here in advance of construction and we have provided a large team of GUARD Archaeologists to carry out this painstaking job. What’s more, further examination of the excavated graves will give us an invaluable glimpse into the lives of Leithers past.”

* Regular video updates from GUARD Archaeology are posted on the Trams to Newhaven You Tube channel. 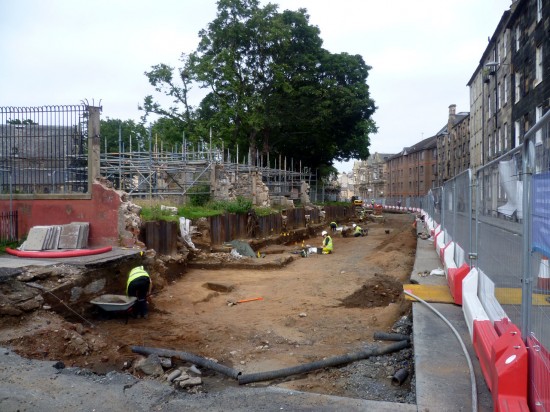 This is outside South Leith Parish Church where the boundary wall has been demolished to allow archaeologists to investigate. This image show the archaeologists from GUARD working to discover more about the history of the area. (Photograph by Roy Calderwood, 13th August 2020)