We have another new location for this edition of “Lockdown Walks” as we take a look at Nottingham Express Transit.

In the below photo we are at the Toton Lane terminus, usually served by trams from Hucknall although at the time of this image rail replacement works in the city centre meant that trams were only running as far as Nottingham Station. Toton Lane – which has a large Park and Ride site attached – was opened along with the rest of Phase Two of Nottingham Express Transit on 25th August 2015. 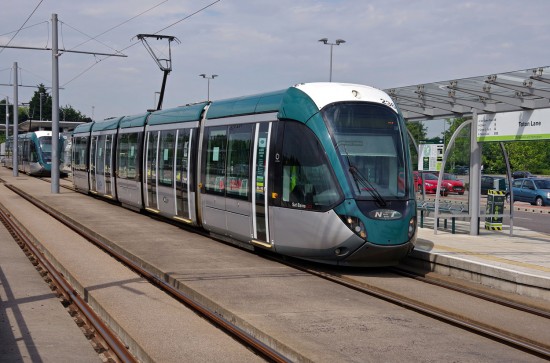 This is Alstom Citadis 236 which is sitting at the stop awaiting departure for Nottingham Station. The arrangement at both Toton Lane and Clifton South is that one side has a “double” platform which allows three trams to be at the stop at any one time. 236 will be next to depart. (Photograph by Ian Nightingale, 26th June 2020)