As part of the Best of Sheffield event held at Crich in May 2014 the Wirksworth Assessment Trial Run passed through which allowed for many unusual photo opportunities and, of course, that included lots of different “Trams &” shots.

With it being a Sheffield event, obviously Sheffield trams dominated the service on the day of the Trial Run – Saturday 17th May 2014 – and in this view we see Sheffield 510 (in its Last Tram Week special livery) just pulling forward at Town End towards the terminus. On a hot day like this its enclosed nature would make it like a sauna but that is unlikely to stop many passengers from going for a ride on board the tram which had recently had its paintwork renewed as part of an overhaul.

The rest of the photo is dominated by some of the steam vehicles which were taking a break at Crich in the middle of their Assessment Trial Run. On the left we have Foster Tractor PN 5629 (built in 1930) whilst Ruston Hornsby General Purpose Engine DO 2953 (dating from 1922) completes the scene. Its not often that the tram is the most modern vehicle in one of these images but this time it is! 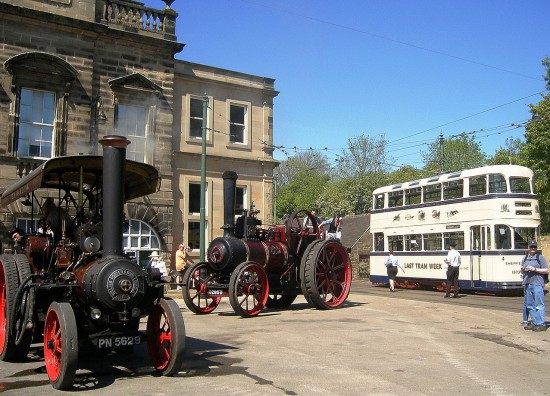