Whatever Happened To? Blackpool Balloon 718

Posted on Tuesday 7 July 2020 by Gareth Prior

The next tram to feature in our series looking at those trams which ran over the last weekend of the traditional tramway in Blackpool is Balloon 718.

Balloon 718 was used on both days of that last weekend. On both Saturday 5th and Sunday 6th November 2011 it was an evening car leaving depot in the late afternoon and then running regular trips between Pleasure Beach and Little Bispham, which as we’ve seen already in this series was the complete length of the Blackpool Tramway during 2011. Its time on the traditional tramway came to an end at 2335 when after a Pleasure Beach to Manchester Square service it turned at Foxhall and headed up Lytham Road to Rigby Road Depot.

718 had already received the “B fleet” modifications for that last season and was in an all over advert for Madam Tussauds. As the “B fleet” cars didn’t see the intended use, the tram has been on near permanent loan to the heritage fleet. Initially running during 2016 in an all white livery (after the removal of advertising vinyls), 2017 saw the car received the Millennium green and cream livery style – a style not received at the time but now retrospectively added. 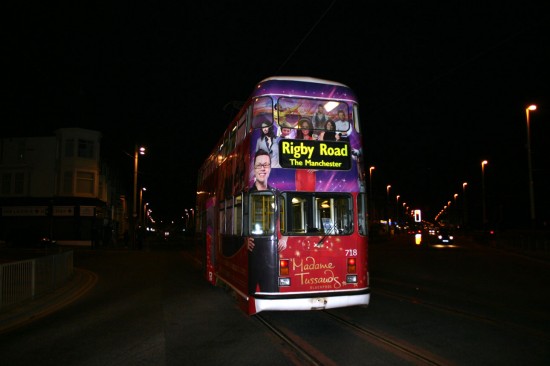 Gok Wan looks very pleased with himself as 718 heads up Lytham Road on 6th November 2011. 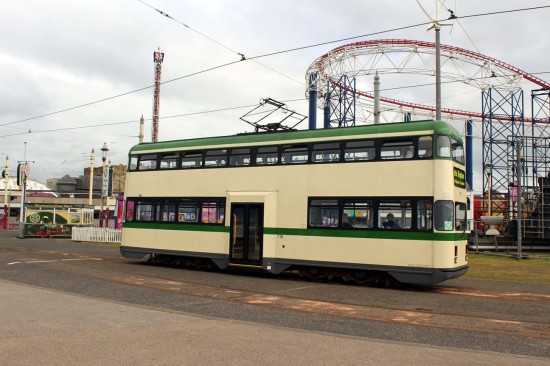 On 27th May 2019 and we see 718 in its green and cream livery sitting on Pleasure Beach loop whilst running on heritage tours. (Both Photographs by Gareth Prior)