Posted on Thursday 11 June 2020 by Gareth Prior

What is with open top tram launches and bad weather? 3rd June 2012 saw the launch into service of Blackpool Boat 236 at Crich and with it came the inevitable rain!

Having been acquired by Crich following the “Great Blackpool Tram sell-off” after the tramway was upgraded to modern standards, 236 was restored to near original condition, the most noticeable alteration being the removal of windscreens. 3rd June 2012 was the date of its official launch and with flags tied from the trolley tower to each corner it was ready to meet its adoring public once more. In this view we see the tram heading past The Red Lion towards Town End and is followed by Leeds 399 and fellow Blackpool tram, Brush Car 630.

In the layby outside the pub there was a visitor in the form of Blackpool Corporation Transport PD3, 501. This bus was new to the fleet in 1967 and would remain serviceable on the Fylde Coast until 1985. It was sold into preservation which saw it head to Scotland and it remains privately preserved to this day. 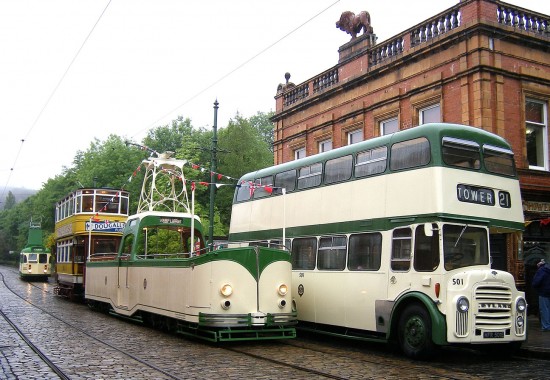